Here is a picture of Amber-left, Toni-center and Emma-right. Our Grandchildren saying goodbye to their mother who returned to Texas. We have the grandchildren for the summer. 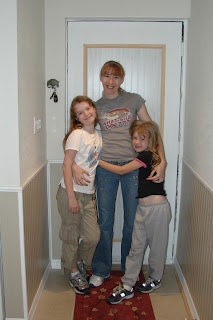 On the way north, we had life jacket drills to confirm that the girls could get in them fast and they decided as a rule to wear them in the pilot house while cruising in case there were dolphins outside that they could go look at under the bow. We are also holding boat classes on board to help the children learn more about the boat they are traveling on. 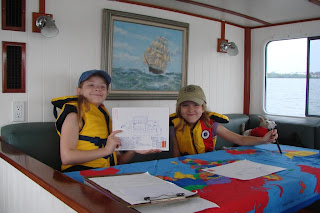 We spent the night anchored off Egmont Key Bird Santuary. Then on Friday morning, we dingy'd over to the public beach area and hunted for shells. Each of the girls collected a nice handful apiece.
As we were preparing to up anchor, the winds increased and apparently the chain caught on the achor chain shoot and ripped it up and also mangled our chain stripper. Luckily, Wink had just gotten a spare chain stripper from Mirage when we were there in April. We are navigating using our #3 backup system, my computer with Nobeltec 8. Our Main computer and our #2 backup computer are at Mirage getting the bugs worked out of them. We miss our weatherworks. After having trouble with the Chain Shoot, we double checked our weather conditions to discover Tropical Storm Barry - so we decided to head back to Sarasota to a Marina that we really liked for the weekend and to await a new chain shoot and another spare chain stripper from Mirage by mail. We arrived at Marina Jack's about 1800 (6pm) with winds around 17-20 mph. Sara awoke us this morning - Saturday to high winds. Sarasota, FL is having a 5 ft. storm surge. We are very protected and on a floating dock. Wilma is checking out the storm in the bay dirctly behind us (above). The photo below shows the surge over the point of the park. 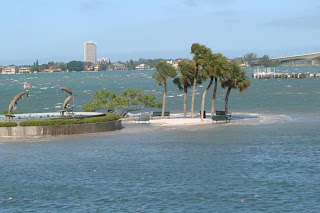 The photo's below show a group of boats anchored that have pulled loose and 4 boats are banging into each other - doesn't look like much damage (if any) but they are tight on top of each other. The second picture is showing a boat that I think is aground just behind us on the other side of City Island. 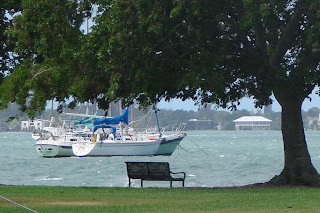