An Interesting Morning on the Water

This morning we decided to make our way towards Everglades City, so we started engines at 0650 and prepared to get underway. Everything was working fine as we disconnected from the mooring balls, and started to head out into the channel.

Just minutes after we departed, the port engine gave us a oil alarm, we looked at it quickly and shut it down, not realizing it was already shut down. We continued for a few minutes on one engine, trying to decide what the problem was, then the starboard engine shut down. We were OK, as we were drifting in 8 feet of water, but the wind was decidedly pushing us. Since both engines failed, we knew it had to be fuel, but just what fuel problem we didn’t realize at this point. 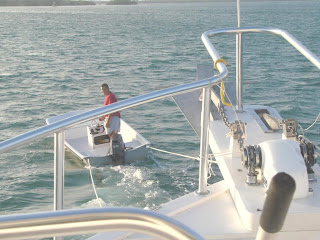 Amazingly, the skiff running at 2400 rpm (about half speed), pulled John Henry at 3.2 knots upwind. It’s nice to know we can do this if we ever get into trouble again. The only hitch, is someone needs to “Drive/Steer” John Henry, when the winds blowing. In this case, Wilma applied rudder and short bursts of the bow thruster to keep John Henry going in the right direction. In about 30 minutes or less we were back at the mooring ball, and hooked up.

The fuel issue could only have been one thing, once we though of it, and that was the “TANK WAS EMPTY”. We had been calculating our fuel consumption and estimating our remaining fuel in the center tank and we felt we had about 200 gallons left. WRONG. This was based on the center tank being 1000 gallons and our usage being 4 gallon an hour of running time. My best guess is that the tank is something less than 1000 gallons (maybe 800+) and we might be using fuel at a faster rate then predicted.

In any event, we pumped 370 gallons of fuel from the starboard fuel tank into the center tank, and all is well. We are now on our way, but we have decided to go to Marathon Key to fill up the starboard fuel tank, just to be safe and to level the boat, since we now have a decidedly port list. We’ll be able to calculate the exact tank capacity and usage once we fill up. 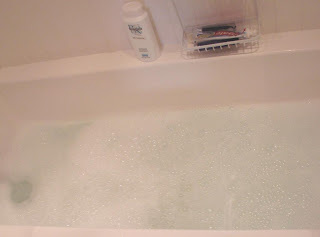 Since Wink wanted to just dump some water to help level out the boat, Wilma decided on a deep bubble bath. There's no point in just dumping good water overboard and we happen to have a hugh tub. 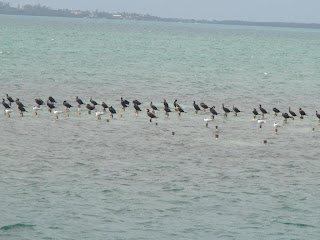 After a relaxing bubble bath, we spotted this great Bird Rest Area at Bowlegs Cut. All the birds had their own stand. A better picture below. 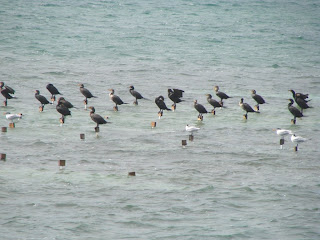