Before our story continues, please accept my apologies for the delay in this posting. My hard drive decided to crash and it took a while to get it repaired.

From Shell Key, we decided to head to Marathon to pick up more deisel. We picked up 384 gallons in our starboard tank just for good measure and to balance out the boat. While getting diesel at the Marina, Wilma's credit card took a dive and was un-retrievable. Wilma had to call the credit card company and tell them it was lost.

It was early with lots of daylight left so we decided to head for one of our favorite places - Everglade City. After a while, we decided that we could not make it all the way to our destination before dark. We anchored at Cape Sabel south of Shark River. It was wide open and protected from the southeast winds. We anchored in 7 feet of water. The next day, we completed our journey to Everglade City. 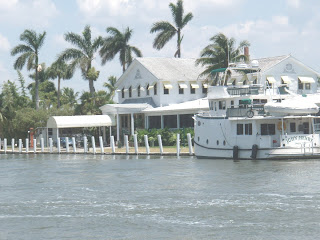 John Henry docked in front of the Rod and Gun Club at high tide with about a 3 knot current. 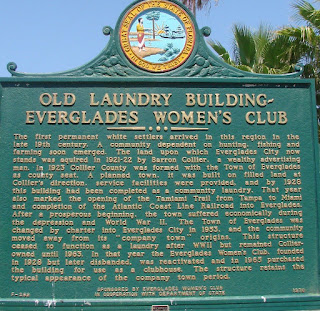 Everglade City is one of our favorite places to visit in Florida. Wilma went to the museum, but it was closed. Double click on the pictures you would like to magnify. Warning: You may have to pull the blog back up to continue. 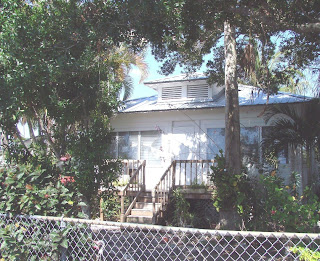 This old home is a true representation of "Old Florida Living". This house belonged to a family whose last name is Noble. We think that they are related to Wink's family, but can't confirm because the owner passed away last year. The home is up for sale now. 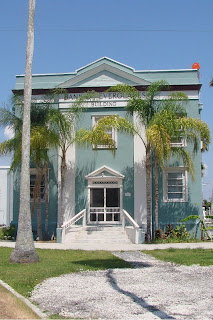 This bank is so neat looking that if it weren't for all the paperwork, I'd open an account up just for the pleasure of it. Wink and Wilma are really trying to get off the grid so I'll just have to admire it from a distance. 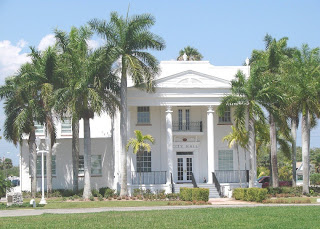 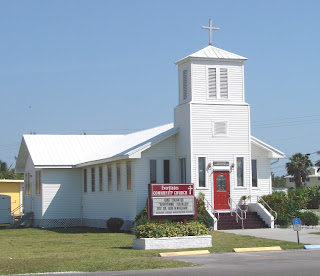 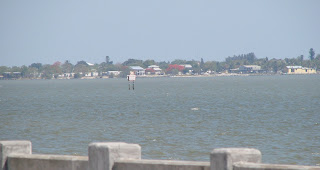 Four miles away is Chucaluskee (the spelling may not be correct). Wink's relatives also use to live in this area. Next trip, we're going to visit the cemetery. We fished several times, but the fish weren't biting. 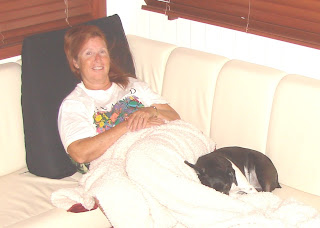 Sara the sea dog is snuggling Wilma after a great day in the grass. From Everglade City we traveled north to Fort Meyers Beach. We anchored in our usual spot east of the Sanibel Bridge. The night was calm and beautiful. The next morning we decided that the seas were calm and that we would go into the Gulf and head to Pelican Bay next to Cayo Costa State Park.
As we were entering Boca Grande Cut, Wink slowed down and asked Wilma if she would please shorten up the harness to the skiff. Just as Wilma got the skiff within 20 feet of the swim platform, Wink had to pick up speed due to wind and other boaters present. Wilma informed Wink that the skiff was too heavy once he picked up speed and Wink acknowledged and said it would have to wait.
As we entered the bay for anchoring, Wink decided that we would proceed with the anchoring. Everything was going well until Wilma started backing to confirm that the anchor was holding. We heard a grinding noise and suddenly, Wink knew what it was. We went out to the Cockpit and saw the skiff slowly drifting away. Wink grabbed his flippers and put the keys to the skiff between his teeth and jumped in. He reached the skiff without any difficulty and Wilma brought him his mask so he could inspect the props. 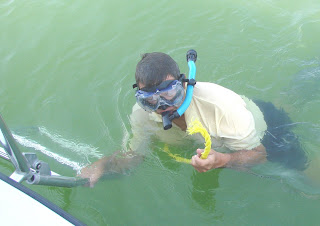 Wink inspected both props and found harness line in each one. After we were certain that the props were clear and the skiff was retrieved, we tested the engines to confirm that there was no damage. All is well and we know that the skiff must be tied up between 6-8 feet to avoid cutting the harness lines. 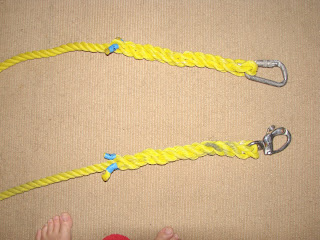 Wink has gotten very good at splicing harness lines. The first set took him hours and this set took about one hour. We have a set of snubber lines very similar to these that we also use as a mooring harness. We discovered that if you have room to extend the harness longer, the boats sway less. The shorter the harness, the more dancing the boat does on a mooring. 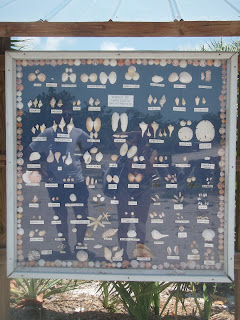 It's easy to dingy ashore. Cayo Costa State Park is only $1 per person for the visit. There is about a mile walk to the beach or you can ride the trolly. This area is great for shelling. 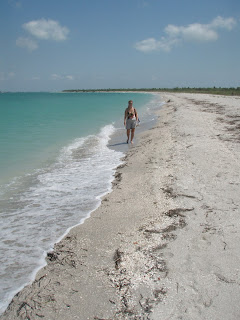 Wink and Wilma decides to walk for the exercise. Wilma does some beach combing while Wink shares his fishing knowledge with some tourist. One of the tourist was swimming and a manatee came up and touched him. Wilma grabbed her camera and tried hard to get a great picture. 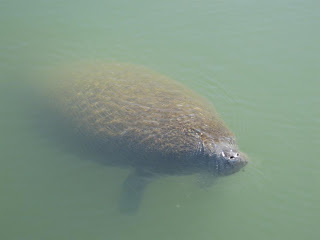 Surprise, this is a great picture, but the truth is that I borrowed it, it's not mine. It's not even of the manatee that I was trying to capture on film. But I did get something. 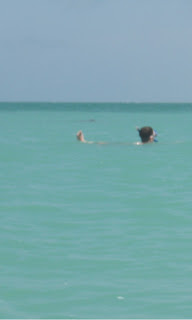 The tourist is in the front and that little spot above his hand is the manatee. That the best that I could get. 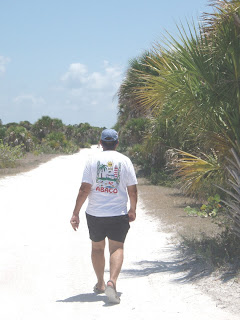 Wink enjoyed his walk and takes in the scenery of Old Florida. The Osprey below seemed to enjoy the hot day. 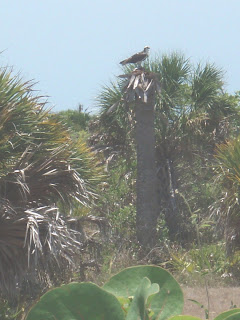 Ocassionally, I get a good photo of wildlife - a great sea gull. We saw lots of mackerel on our trip, but they were not interested in biting. The best way to see fish is to look for birds. 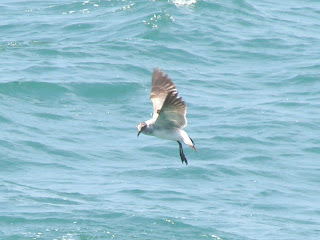 Wink and Wilma went out trolling trying to catch a fish for dinner. We saw a neat looking boat, which reminded us of Salty Dawg (A Prilgrim). We motored over and spoke with Art and Irm on a Pilgrim. They had actually been on Salty Dawg before the Pat's bought it. They seem like great people. 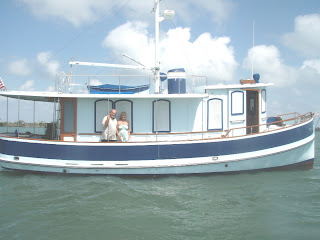 Just as we pulled up to their boat, Wilma got a strike and yeah it's a sea trout. Wilma quickly measures it to see if it's keepable. It was perfect, about 3 lbs. 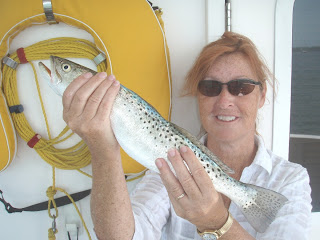 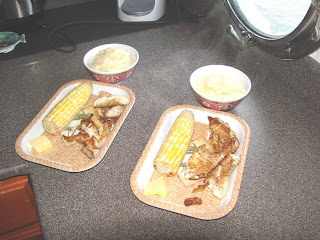 Sea Trout - 7:00 pm - Cleaned by Wink Thornton, Cooked by Wilma Thornton
Served with Corn on the Cob and Grits. 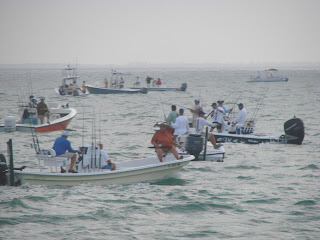 As we depart through Boca Grande Pass, this scene never seems to end. It was there when we entered and it's there anytime you go through. I know they must go home at night to sleep, but that's only a theory. Boca Grande Pass is the world's most popular Tarpon fishing. This photo is only a small sampling of the boats that tend to live in the pass. 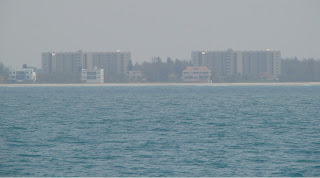 As we head north, we pass our condo buildings on the south end of Siesta Key in Sarasota. Our building is the one on the right with our sister building on the left. Between the two, there are 120 units. Our unit is on the top floor. It's not directly on the beach, but it has water on three sides. It's just off the ICW and near Turtle Beach. It's up for sale. Wish us luck. 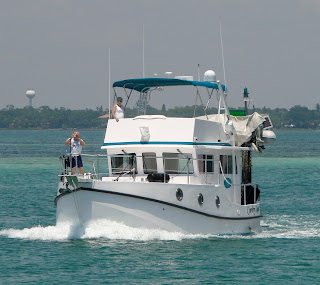 Just as we're passing the condo, we get a phone call from Joe and Punk Pica., owners of Carolyn Ann, a N37 by Great Harbour. They had crossed the Gulf of Mexico from Pensacola and are almost to Sarasota and wanted to get together for a visit. We told them we would meet them at Marina Jack's. There is an ancorage right outside of the marina that they could stay.
As we approached the entrance to New Pass, we spoke with Joe Pica and they said that they were almost to the anchorage so they would do a float by and do a photo swap of the boats. Here is a picture of Joe and Punk on Carolyn Ann taking a picture of John Henry as we float by. We went out to dinner in the evening and had a great reunion. Joe and Punk continued on their journey south the next day. Wilma plans to have their blog linked within a few days. All blog links are located on the right side of the blog about 3 sets down. 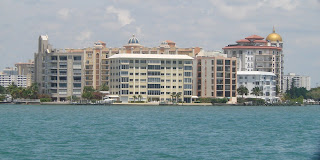 Jjohn Henry is docked at Marina Jack which is just right of this building in Sarasota. This is a very pretty view to enjoy as we clean up the boat.
Posted by Wink and Wilma at 8:06 PM