Getting Ready to Leave Bahamas

It's the beginning of April and it's time to start packing up all our treasures and putting them away for the voyage back to the USA in the middle of the month. 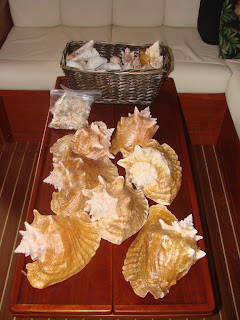 Wink and Wilma have collected lots more sea shells than shown here. But here are some of the largest collected. Conch is also a island local food attraction. We find the conch out in the Sea of Abaco and place it in a zip lock bag and freeze it. Then we thaw the conch for a few hours, take a pair of plyers and remove the creature from inside. Wink cleans the creature and we usually give it to Sue Graham who makes us all fantastic conch fritters. Wilma then soaks the conch shell in bleach water for a couple of days at which time she cleans it with a small toothbrush.

Our friend Bettie on Tar Heel made spectatular artwork on giant junkanoo beans. She was going to help Wilma paint her own bean, but alas time ran out. After several repainting of the John Henry - Wilma finally began to get the idea. Also above the John Henry bean is the beginning of a Pine Cone Basket that Sidonia on Double Trouble starting teaching Wilma. Wilma plans to work on the basket during the cruising time to the USA

Vanessa on Tally Ho saw my John Henry bean and really wanted one so she came over with a picture and we created it together. She painted the bean brown and Wilma did the artwork. Wilma has several other art projects that shed didn't complete. Wilma ran out of fabric paint and will wait until the USA to get more. Those projects will be displayed later. The projects include a self expression art work on an Apron from the Art Teacher (Tonia) in Abaco and a Lion Fish throwdown which needs more work. 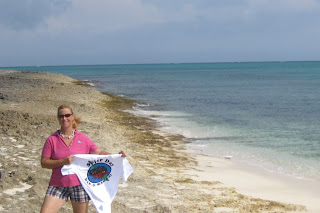 Man-O-War Cay had their first ever Heritage Day (Sojer Day) is their name. Wink and Wilma went over to the island by ferry along with about 8 other RMHYC members. Wilma got a T-Shirt for future memories. 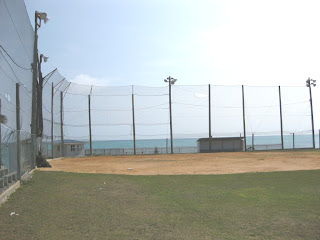 This baseball field is right on the ocean. The above picture of Wilma was taken just below on the beach. These island are a great place to raise families. Everything here seems so safe. 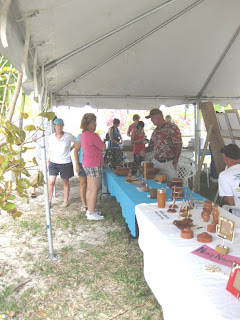 There were several small booth exhibits of local art and treasures to be purchased at the event. 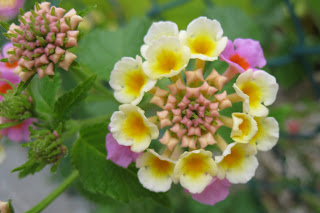 The next few slides are of wonderful flowers that Wink enjoyed taking pictures of and we hope you enjoy them as well. We don't know the names of many of these plants. 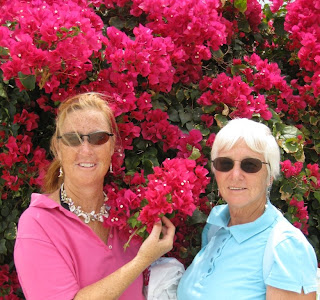 Sue Graham has a GH37 Trawler and had left Abaco Beach Resort on April 1 tomoved their boat to Man-O-War where they will stay until at least June (or if her refrigerator breaks). The refrigerator is making a noise occasionally. Here, Wilma and Sue pose for a last goodbye until we meet again in the USA. 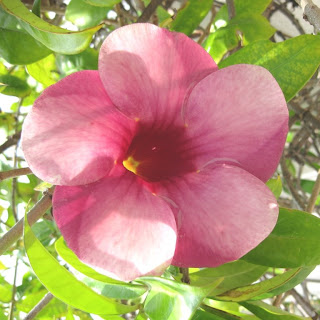 This is an Allamanda Plant. Wilma had never seen a pink one and thought that they only came in Yellow. Growing side by side were Yellow and Pink. 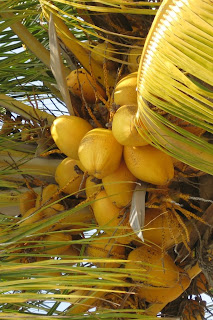 It's wonderful living where the coconuts are usually free for the picking up off the ground. We had lots of wonder fresh coconut this year. 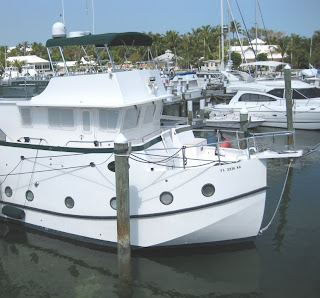 The day after the Sojer Day at Man-O-War, our friends Bob and Judy on Shade-Mor invited 39 of their closest friends to go on a short trip over to Nippers on Guana Cay. As we left at 11:00 a.m. Wink took this very nice photo of John Henry sitting very lonely at the end of the dock. 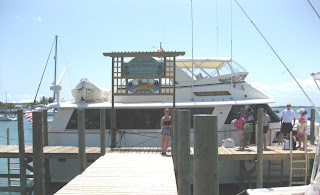 Wilma stands on the dock in front of Shade-Mor in Guana. 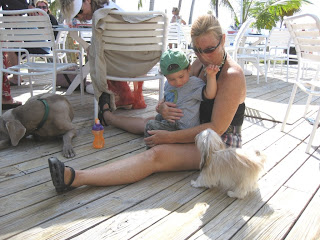 After our visit to Nippers, we stopped by Grabbers and had a visit with a few dogs. My most favorite boy in Abaco is Sebastian. He's really beginning to like dogs. He likes small dogs. 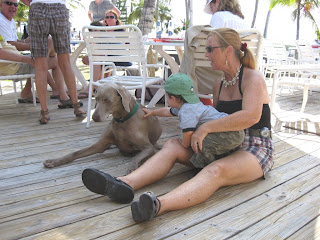 He likes big dogs. Especially if they are calm and submissive getting affection. (Ceasar Milan's plan on The Dog Whisperer). 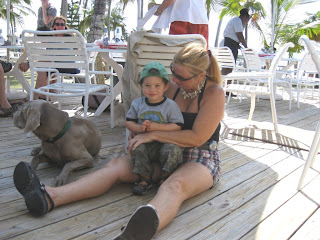 His birthday is tomorrow and I didn't get a chance to say goodbye because he was in Florida when I left. Happy Birthday Sebastian. But his most favorite dog in the world is:::::::: 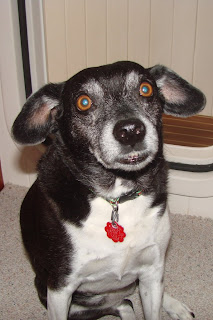 Sara the sea dog...........He loves her best and she loves him too.
On Monday, we went diving and went took some spectatular underwater pictures. Wilma was going to put a couple in, but time is running out for this anchorage. Wink's pictures are so good that Wilma is going to do an entire posting of underwater shots - Wink's Waterworld - look for it at our blog in the future.
On Tuesday, Wink and Wilma got out the Hooka system (compressed air by compressor on the surface) doned their dive gear and set out to clean the bottom of the boat. Our friends Andrew and Dick kept and eye on us and the machine for safety. It took us about 2 hours to clean the bottom of John Henry and get him ready for cruising. Wink then went down to Andrews boat bottom and spiffed it up as a thank you for watching us. 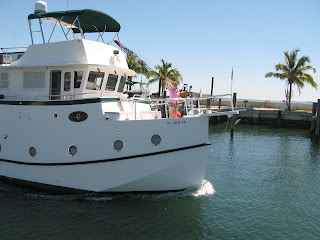 On Wednesday, our friends Pat & Pat on Salty Dawg called us on VHF and said they needed to leave the islands and head home. They had a generator problem and couldn't continue cruising without one. Wink offered them our spare generator - Honda 2000. They were amazed that we had one and accepted graciously so they could stay in the Bahamas longer.
We were planning to leave Marsh Harbour on Sunday (Easter), but then changed to Saturday for better weather, then Friday because Pat & Pat really need to get moving, but.......
on Thursday, we woke up and the weather was beautiful - very beautiful. In fact it was so beautiful that we couldn't miss this opportunity to get out of our slip with no wind, glass like water and wonderful sunshine. So we left Marsh Harbour on Thursday, April 9th about Noon. Andrew on Tally Ho sent us this picture via email.
It was a quick get away and we decided it was so wonderful that we went into the Atlantic Ocean just north of Man-O-War Cay and had less than 1 foot swells. Wilma fished and fished, but no fish were hungry. We re-enter the Abaco bank at Whale Cay (a very dangerous area if it's bad weather). We anchored about 4:40 pm at Manjack Cay. Our friends Kathy and Milt on LO KEE were already there so we skiffed over and had a soda with them.
After leaving LO KEE, we stopped by Salty Dawg as they had invited us to dinner. It was fabulous, steaks on the grill, bean salad, sweet potatoes and white potatoes on the grill. A lovely evening.
On Saturday, we (Salty Dawg and John Henry) dones our skiffs and went beach combing. The weather was still nice so we drove our skiffs into the Atlantic Ocean side of Manjack Cay and enjoyed the amazing day. Later we drove our skiffs to Green Turtle Cay to fill our skiff up with gasoline. This is the only thing we forgot to do with our hasty departure.
One of the marinas in Green Turtle had purchased gas a long while back when it was expensive and was still charging the expensive rate of $6.18 gallon. We said no thanks - we could get gas later. Just for curiousity, we went across to the other marina and did buy gasoline there for $3.82 a gallon (it was in the same area) crazy!!!!!
Gotta go for now. We're moving away from internet until we get to USA. We're also going to check out Allen's-Pensacola Cay (should be very secluded).
Posted by Wink and Wilma at 9:45 AM