On Tuesday, May 11, 2008, the Royal Marsh Harbour Yacht Club held a Sock Hop. Wink and Wilma attended and had great fun. 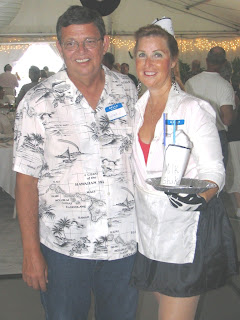 Wilma went to Sock Hop as a Car Hop from Johnny's Drive-In Restaurant. She had the complete custome including the short skirt, apron, hat, milk shake on a tray and the roller skates to complete the outfit. 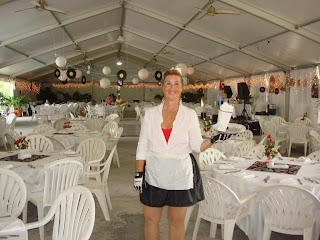 We had several entertainers. From "O'Henry" Henry came as Conway Twitty. His singing was fantastic. 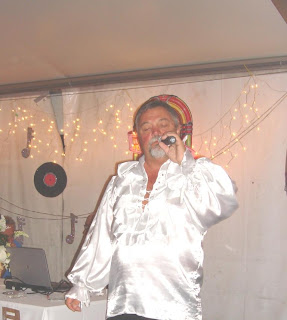 From "Sea Island Girl", Robert Wilson appeared as ELVIS. He gave out silk scarves as he sang to all the girls. 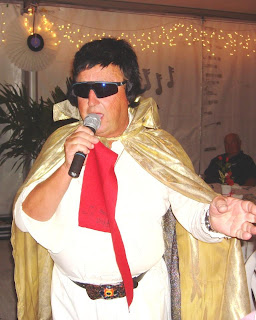 After all the entertaining, ELVIS left the building. He was spotted outside shortly after with his daughter, Lisa Marie (below). 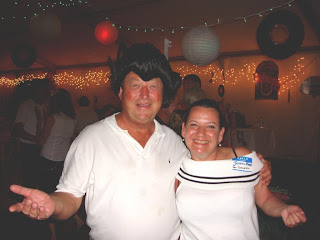 Mary and Scott Coles from "Mascott" were really in the groove with cat rimmed - googly eyed glasses and a flat top. Mary really made a spectacle of herself. All the guys were intently enjoying her eyes. 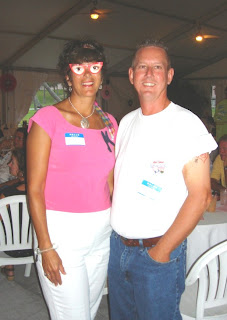 Rita from "Magnum Opus" showed up wearing very bright bahama drink glasses. She was so bright. 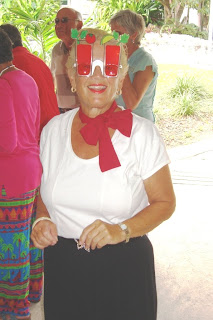 Connie and Galen were enjoying the dancing. Everyone looked like teenages to me. 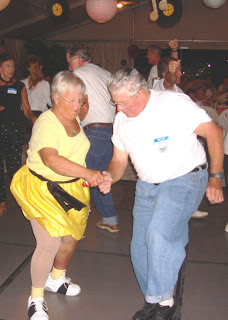 Milt and Kathy Sales from "Low-Key" were the winners of the twist contest (below). Milt came as a Nerd (complete with tape on glasses, slide rule on belt and ink spot on shirt full of pens). Kathy was a teenie bobber with poodle skirt. 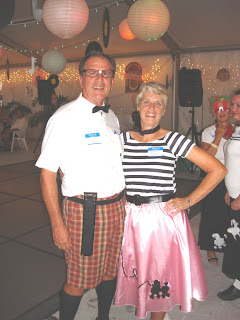 Wilma performed two shows of her skating abilities. The first show was a dance to the music of Buddy Holly's song "That'll be the Day". Here Wilma is gliding around with ease just like a real car hop waitress. The milk shade was never spilled. It was delivered before dancing. 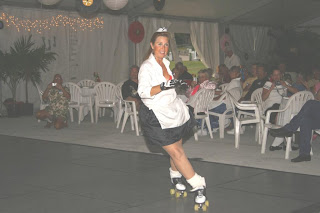 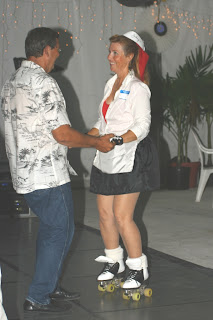 Amazingly, Wilma won the BEST COSTUME award for the night. Judy Law, one of the event coordinator presented Wilma with a large bottle of RUM. 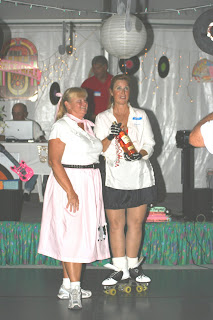 Wilma has not seriously roller skated during the last 15 years. But with car hop inspirations, and encouragement from her friends and coaches Judy Law, Judie Jenkins and Mary Coles she was inspired to do her best and it paid off in RUM.

Everyone had such great outfits. But yours was the best. Any rum left?

We are enjoying your adventures. Maybe we will be there with you next year.