Our good friends Lisa and Kevin Bradshaw came for a visit from Plano, TX. Kevin picked out the clock you see to the right which was given to Wink upon retirement from FM Global. 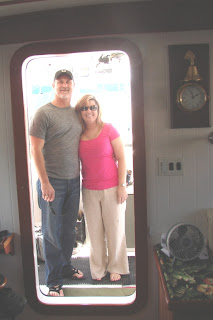 Kevin and Lisa arrived at our boat "John Henry" in the early afternoon and we had a fly bridge happy hour on our Mirage Great Harbour Trawler with lots of friends. 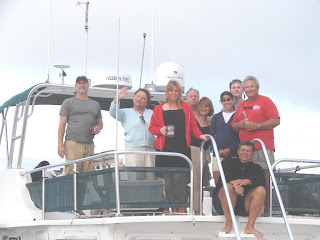 From left is Kevin, Sherry, Lisa, Herman & Mina, Rachel & Henry, Fred (Sherry's hubbie) and Wink is sitting at the top of the ladder. 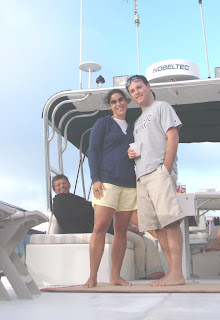 Wink is sitting near Rachel and Henry. Henry is Sherry & Fred's son and Rachel is their daughter-in-law. On the second day of Lisa and Kevin's visit, a large sea turtle came by the boat and Wilma tried to get a picture and hit the wrong button on the camera and did not get the picture. The picture turned out to be a 3 second movie of the turtle which has been included somewhere in this posting- hopefully it will work. 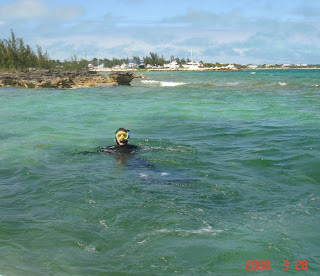 Kevin went snorkeling many times with Wink and they also had lots of fun fishing. Above photo is Kevin in the Abaco Bank snorkeling. 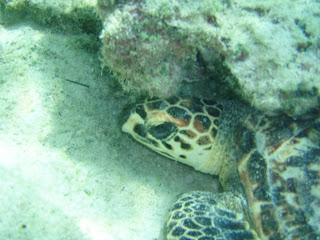 While Wink was snorkeling, he saw this small turtle hiding under a rock and decided to get Wilma a nice picture for the blog. 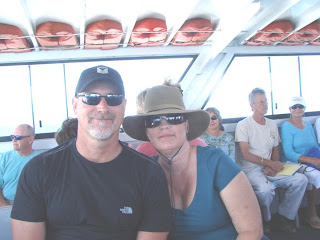 We took the Ferry over to Elbow Cay (pronounced key) to visit Hopetown. Here Kevin and Lisa are enjoying the ride. 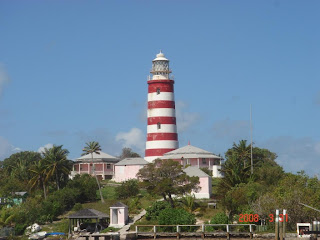 The lighthouse is a spectacular site. We can see it all the way over to Boat Harbour which is about 4 miles. 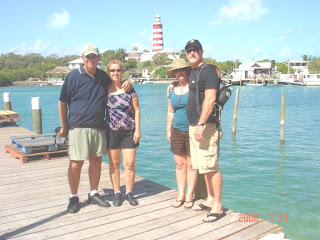 Wink and Wilma are on the left with Lisa and Kevin are on the right with the lighthouse in the background. 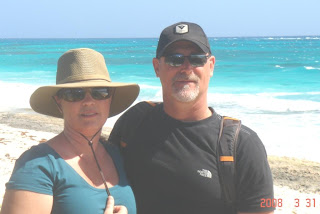 We went to the beach for a short visit, but the winds were about 25 knots so we didn't stay long. 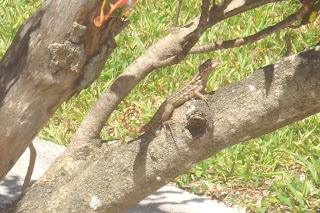 These curly tail lizzards are everywhere. This is a small one. The average size is about 5-6 inches with the largest being 8-10 inches. 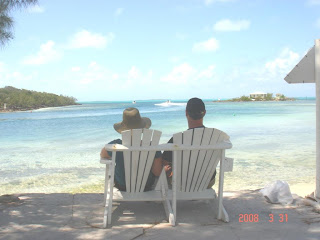 We found a great sidewalk that leads to the water with two chairs. Lisa and Kevin demostrates just how fast or slow times passes. Not a care in the world. 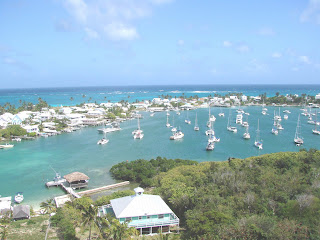 We all went to the lighthouse in the end and this is the view. It's like a picture postcard and says it all. Goodbye Lisa and Kevin, ya'll come back again soon.

Dear Lisa: Loved the pictures. The water looks beautiful and reminds me of Bermuda. Looks like you had a wonderful time - very relaxing.