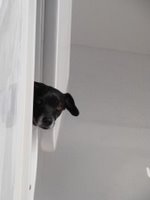 we left Green Cove Springs Florida and headed up the St. Johns River to the Atlantic Ocean. We were traveling with another boat by the name of Semper Fi, which is a 37 foot boat owned by the Great Harbor Boat Builders. We had two additional people on board John Henry to help with the trip. Semper Fi had two people on board. We spent two days in the Atlantic Ocean (50 miles offshore) heading towards Beaufort North Carolina. During this ocean transit we ran 24 hours a day, and we took some incredible photos of dolphins and had some fantastic fishing. We caught mahi mahi, barracuda, a 6 foot sailfish, and tuna. The nights were brilliant with incredible views of the stars, the milky way, and phosphorescent marine life. We made landfall at Beaufort, North Carolina at about 11:15 am on the 29th passing shrimp boats and various commercial vessels. We headed North into the Inter Coastal Waterway up the Neuce River, Pamlico Sound, and the Pungo River. We passed bridges, saw beautiful homes, all manner of wildlife. We anchored for the night at the mouth of the Alligator River, near Belhaven N.C. 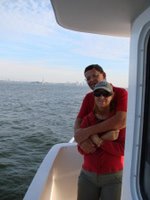 The night was calm and dark, very dark. We were waiting for the Alligators to show up, but all we got were a few mosquitoes. On August 30st we pulled up anchor about 7:00 am. and headed into the Alligator Canal, which was very long and boring, then into the Alligator River which was much larger and wider (but didn’t see an alligator), then across the Albemarle Sound where we met and entered the North River and headed for Great Bridge, VA. , where we stopped for the night.. We spent the night at a marina named “Virginia Yacht Basin” which is on the Elizabeth River at Great Bridge Virginia. We headed up the river toward the Chesapeake Bay the next morning, but at about 9:30 am the weather forecast looked poor for the next two days so we decided to head into a marina at Portsmouth, Va. We got to the marina about 11:00 am. We stayed for two days and were hit by Tropical Storm Ernesto, which passed us about 40 Miles due West. The wind blew about 25 to 40 Mph (gusting to 50MPH) and John Henry road the storm well. We tied up using 10 lines including our 5/8” and our ¾” lines. After the storm passed us we got underway and entered the Chesapeake Bay 8:30 am. It was a bit windy, but a very nice day. We traveled without problems until about 10:00 am, when the RPM’s on the starboard engine started to drop. The engine stopped all together, which turned out to be clogged fuel filters and we spend a couple of hours running on one engine, while we made repairs. 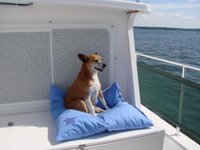 Anyone who would buy a boat with one engine is crazy. Since the Port engine was about to stop, from the same problem, we made sure the starboard engine was working fine, then turned off the Port engine, and changed all the filters. We continued up the bay and entered the C&D (Chesapeake & Delaware) canal the next morning at about 9:00 am. The canal was very interesting as it is man made and straight as an arrow in most places. The canal connects the Delaware River with the Chesapeake. We passed through the canal and down the Delaware river, rounded Cape May and headed for New York. Once again we were out in the Atlantic. The Ocean is the best, not a lot of traffic, so you put the boat on auto pilot and let it run. Traveling at night on the ocean is also fun, but it can be a challenge identifying which direction large container ships are going, and wondering if they are going to run you over. Wilma and I took the 7:00 pm to 1:00 am watch and during that time, we passed Atlantic City, which was brightly lit and beautiful. We arrived at New York Harbor and the statue of liberty about 7:30 am and after dodging some large ships, small traffic, and huge ferries, we did a photo shoot of both of the boats against the statue. This was a great sight and something to remember. 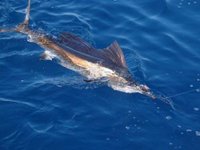 I took the helm at the statue and we headed up the East River. Wilma and our two crew Klaas and Eric were on the fly bridge as it was a beautiful clear and warm day, and Wilma took about 100 pictures of New York. We went under the Brooklyn Bridge and a lot of other bridges. We started up the East cannel around the island and we had to turn back since that side of the river was closed. There was about a 3.0 to 3.5 Knot current going against us and the river had whirlpools, large ships, local small crafts, and some debris. All we hit was floating debris, not boats, rocks, or seawalls. I drove the entire time using the tiller (as opposed to the auto pilot), adjusting the crabbing and current effects one degree of the time. Very challenging and stressful. We passed through the East River into the Long Island Sound. Not many large ships but a huge amount of small sail boats and power boats. It felt like we were in a pin ball machine bouncing from point to point to avoid other boats. . We stopped at Port Jefferson (on Long Island) and each boat took a mooring ball for the night. The anchorage was very crowded and the wind was blowing about 30 MPH. It was hell getting to the ball where we needed to tie up, thank God we 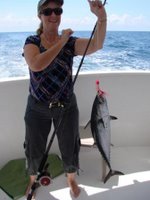 had extra hands on board to help. It took a couple of tries. It didn’t help that there were about 100 people on shore and on other boats, that are all hoping you’ll crash into another boat so they’ll have something exciting to talk about. Sometime after 9:00 pm, the power was off and the batteries were essentially discharge. This was my first indication that there was a serious problem with the batteries, and I would spend the next week trying to solve the problem. We started the generator and pumped up the batteries. We headed out about 8:30 in the morning, and getting off the mooring was a lot easier then tying to it. We headed up the Long Island Sound towards Newport, RI. We headed up East Passage and into the mooring field at Jamestown Marina in Rhode Island. Overall a great experience, fun, memorable, and exciting.

What a wonderful story and trip. Please keep it going. A Mirage trawler is at the top of my list and it is very exciting to be a part of your journey, as if I was there.
Thanks