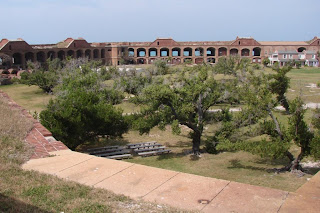 The morning seas started out nice, however, they became confused and choppy with swells of 4-6’ and winds from 15-20 knots. The good thing is that the seas were following and those are great seas to have in a . In the early afternoon, we attempt a course change which bought rough seas on the beam. Tom with Gale Force tried to contact Dry Tortuga Park Rangers to confirm best channel to enter with no response. The Freedom II Ferry heard our call and recommended that we change course and come in through the north channel. We had anticipated a southern channel entry and was using the following seas to get us around to it, now we must turn back and fight the beam seas to get to the north channel. Winds had risen and were gusting with high waves until we reached the main channel then we had calmer waters. Our anchor dragged in the night and we had to move at 1:30 in the morning, Tom help us, thank you. Our anchor held tight after that change. We were so tired that we didn’t leave the boat for two days. Tom and Gale came over to John Henry for sunset and dinner on Tuesday evening.

We toured on Wednesday and really had a great day.Left: 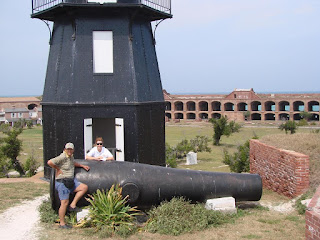 Here is a picture of Wink and Wilma in front of the Harbor Light at Fort Jefferson. 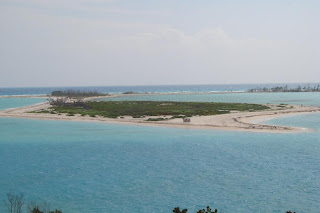 Right: A picture of Bush and Long Keys. Bush Key is a santuary for the Sooty Tern who nest there from February to September. 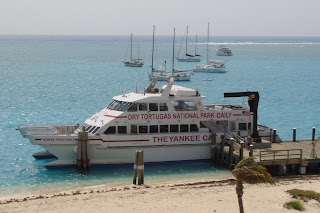 You can double click on the pictures to enlarge. John Henry is on the far right. Wink and I were docked across from this Ferry when we were in the Key West Bight Marina.

We also fished and caught lots of Bonnet Sharks and Mangrove Snappers. Thursday, we snorkeled in the morning along the moat wall and saw lots of fish and coral. We even saw 3 gaint lobsters (of course they were in the no touch zone - they're not dummies). We also went fishing for grouper and Wink did catch a nice Red Grouper (not legal size) so it went back in to grow up. We had a trip planning meeting and early drinks on Tom and Gale's boat then returned to our boat to prepared to leave on Friday because of a good weather window. 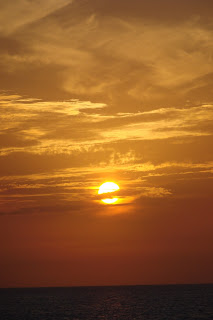 Wink took many beautiful pictures of the sunsets. Here is just one.

The night sky held the most beautiful stars I've ever seen. The milky way was very visible and I (Wilma) was able to see star clusters with my binoculars.