Tom and Gale Zalverson, GH47 Gale Force, came to Key West. Wink went out in the dingy and helped them tie up to the mooring ball. Friday was a very nice day in Key West so we decided to go fishing and try our luck. In 3 hours, we caught a small Barracuda, Yellow Tail Snapper, Lane Snapper, Mackerel, Key West and Blue Stripped Grunts, Pinfish, and Wilma’s favorite Sand Perch. We also had 4 sightings of Sea Turtles. We kept enough for dinner and the rest went back to fight again. We went aboard Gale Force for Sundowners and Sunset. At sunset, it was agreed that Gail Force and John Henry would go to the Dry Tortugas together, eighty miles west of Key West on a two day trip. The first stop will be the Marquesas Keys about 30 miles west. The day was beautiful and both John Henry and Gale Force piloted from their Flybridges. After about 2 hours west of Key West, the water started changing colors of blue, the shades are vibrant and varied. We were in awe. As we approached the Marquesas Keys the islands white sand was visible for miles. The blue water turned turquoise near the island and the sky was heavenly. We passed a sea turtle on the way inside the channel. 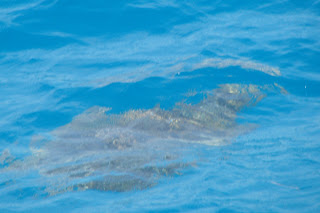 My picture of the sea turtle itself is not great, but the water part of the picture is only a sampling of how clear it becomes. After anchoring, Wink and Wilma and the dogs went ashore to the beach only as the islands are off limits. The dogs enjoyed a good run and a refreshing bath afterwards. Wink and Wilma went out again in the dingy for fishing. Wilma caught and released a 4’ barracuda – sorry, no camera available. Wink caught a 3’ barracuda and we decided to drag it to the boat for a picture, but it got away. We stopped and picked up a camera and the jinx was on, no more fish caught, but in total we caught 9 barracuda.
Posted by Wink and Wilma at 11:07 PM