This posting is basically to fill in the blog from November 1 to December 31, 2006. We were having blog problems and couldn’t get anything to post.

When we returned to Green Cove Springs, FL from the boat show tour, we spent a couple of weeks down sizing the boat. It’s amazing how much stuff you can put into a boat and never use, we decided to clean out.

After a couple of weeks, we (Wink, Wilma, Buster and Sara) went to Yazoo City, Mississippi for a couple of days to visit Wilma’s parents. Wilma had also promised to rebuild the Christmas Tree that she and her dad had built about 10 years ago. On this tree is an ornament for every member of the family from her parents down to the latest great-grandchild. Parents (2) Children (7) Spouses (7) Grandchildren (16) Great-Grandchildren (23) and one on the way. Wilma’s parents also celebrated their 60th anniversary while we were on our boat show trip. 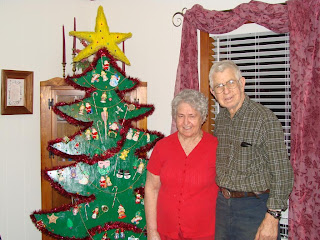 After Yazoo City, we traveled on to Plano, TX where we visited our grandchildren and both sets of their parents. We enjoyed Thanksgiving with both families and then also went to Keller, Texas to spend some time with Wilma’s brother on his horse ranch and stables. Charles Timmy is an expert Horse Whisperer and trainer. The grandchildren (Amber and Emma) love riding horses with him. 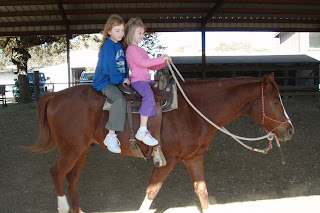 We also visited lots of other family members in Texas and saw all of our friends who we miss a lot. As we left Texas, we traveled to Pine Bluff, Arkansas and had lunch with friends and then traveled on down to McGehee, Arkansas to visit with Wilma’s sister and family. Wilma and her sister, Betty made lots of Christmas treats and also had a ladies Christmas Party from Betty’s Church. Wilma won a beautiful Santa Claus from the Chinese Christmas Exchange.

One last stop at Wilma’s parents in Yazoo and we headed back to Green Cove Springs by mid December. We spent Christmas with many other boaters at the Reynolds Park Marina Club House. Everyone brought a dish and had a great time.

Wink and Wilma also hosted a New Years Eve party on “John Henry” which included dancing on the flybridge and watching lots of fireworks.
Posted by Wink and Wilma at 10:45 AM