How early, 3:00 am, Wink and Wilma on GH47 Trawler John Henry rigged for "silent running" that means stowing away the last of the loose items in the master stateroom, and had a cup of coffee. At 3:30, all boat owners reviewed the weather and didn't really like it. Wink hailed a local fisherman via the VHF for weather conditions in the Gulf Stream. Local Fisherman said that there were 2 to 3 ft swells - everything looked good to him. Everyone weighed anchor at 4:00 a.m. (pitch black). John Henry travel out the Lake Worth inlet first with Wilma on the bow to ensure good night vision. Pokey followed with Odyssey following last.

The local fisherman was a little bit off on the size of the swells. They were more like 4-6 ft swells. The good news is that they were swells not white caps. The sun rose about 6:00 am with this fantastic sunrise view. 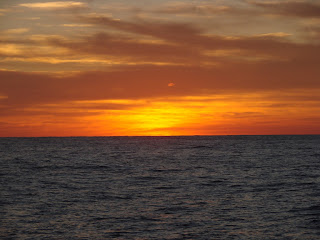 By 6:30 am our sunrise started showing the clouds on the horizon. 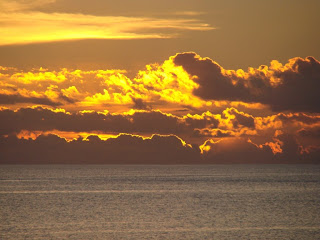 About 10:00 a.m.. we were about an hour from the Bahamas Bank.The water depth was over 2100 feet and the water was deep blue. 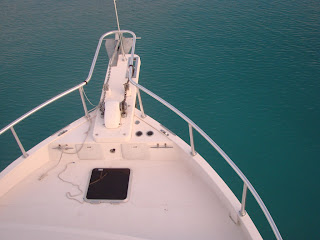 We entered the Bank just south of Memory Rock and continued our journey passed Mangrove Cay and on to Great Sail where we anchored on the west side of the Cay to protest us from east winds. The evening was extremely calm and beautiful. John Henry anchored first and Pokey anchored to the North while Odyssey anchored to the South. 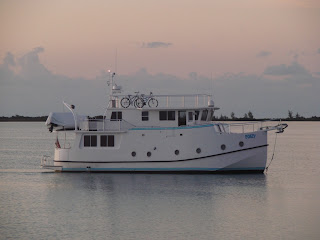 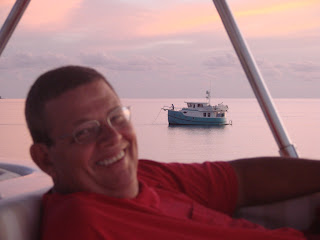 Wink on John Henry's fly bridge watching Odyssey anchor to the South. What a great day to be in the Bahamas. 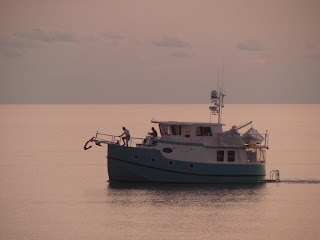 Odyssey, anchoring in Great Sail Cay, Bahamas - this is their 7th year to spend the winter at Marsh Harbour. 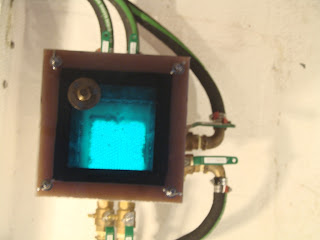 This is our Sea Chest. In the St. Johns River, where the water is dark, we could never see all the way through the chest. This picture is taken on the Bahamas Bank where it shows how clear the water really is.
After a good night sleep, the trawler convoy headed for Spanish Cay where we would all clear customs.
Paul & Sue on Odyssey continued on to Man-O-War Cay to drop their crewman, Charlie at his home. They stayed there until Thursday.
Tim & Becki on Pokey followed Odyssey through Don't Rock and continued on to Treasure Cay where they stayed the night. On Sunday morning, they continued in to Marsh Harbour where they settled into their dock.
Wink and Wilma on John Henry decided to stay at Spanish Cay for a few days. They have a friend, Richard who works there. This year is very slow for Spanish Cay so we were the only boat there for most of the time. We had the marina to ourselves and most of the island to ourselves. Below: John Henry at Spanish Cay Marina in Abaco, Bahamas. 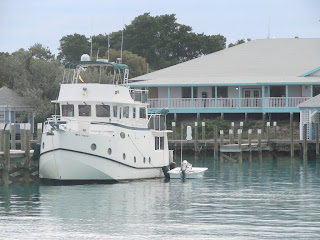 The first night, we caught nearly a dozen little snappers and had a great fish dinner. The sunset for the evening was amazing in the middle of nowhere. This is a picture of the sunset from the dock under John Henry's bow. 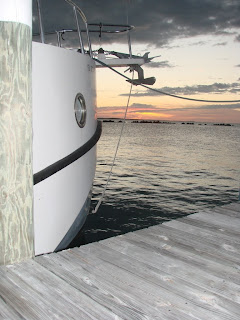 This is the same sunset from the port (left) side of the boat looking out over the breakfront of the marina. 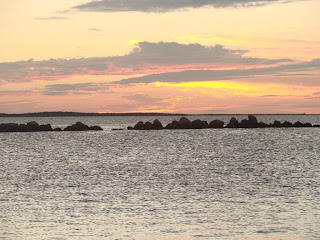 Just after sunset, Wink went fishing for Shark bait. There are lots of sharks in this area. They are fun to hook, but not bring in. 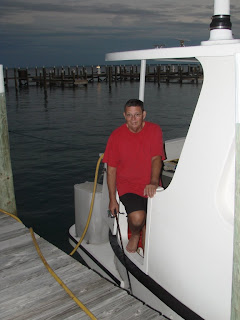 The second day, we went snorkeling and found a bounty of food and shells. This conch is not only really pretty, but has a good supply of conch meat in it. To retrieve the meat, place the entire shell into a plastic bag and freeze thoroughly. Remove from freezer, let stand over night to thaw, immerse in water and pull out the conch. Clean and remove all dark parts of the conch keeping only the solid white piece for cooking. Rinse out conch shell and scrub clean. Add a small amount of bleach to the water to sanitize shell. 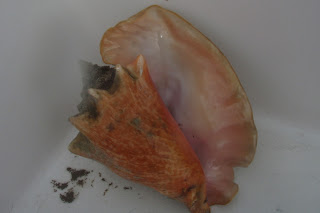 Wink also caught three lobsters and speared a nice candy snapper. The lobster was prepared two different ways for dinner. The first way was cubed with butter and garlic. The second way was baked at 450 degrees for 20 minutes with Paprika & dipped in butter. 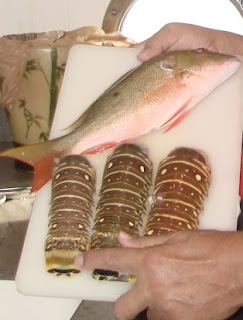 During our snorkeling adventure, we met the owner of the marina who pointed out an shallow airplane crash near us to dive on. Apparently, this airplane has been there for over 20 years just a few feet from shore. Very interesting to see all the fish living inside, but eerie. 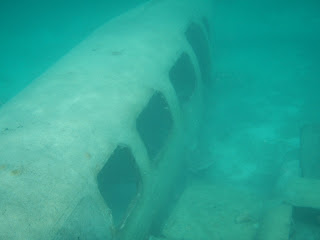 Sara the sea dog was extremely happy on Spanish Cay. She was the only dog on the island most of the time and was allow free run - no leash required. I think you can even see her smiling. Wilma and Sara went for many long walks, with Wink joining them on the short walks. 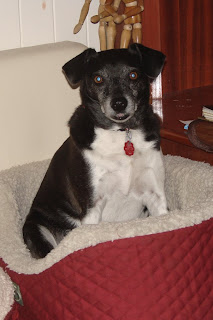 The next day, our snorkeling - lobster hunting yielded 6 lobsters. Wink was excited and happy about hunting lobster and he really enjoyed the vigorous swimming. 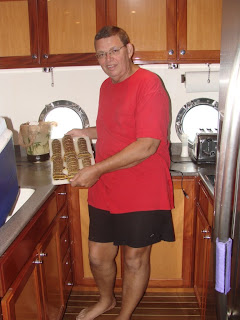 Another picture of Sara - without a lease, but not following Wilma on the dock. Sara decided to just sit this one out. She doesn't really like walking on the wood docks anyway. 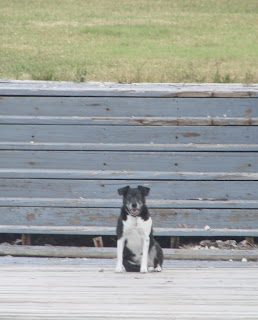 Last year, we borrowed our boat builder's skiff to make sure that we liked it. We did so we had one built for us. They did a great job. They even put the name on it: T/T John Henry - for the non boaters, that means Tender To John Henry. 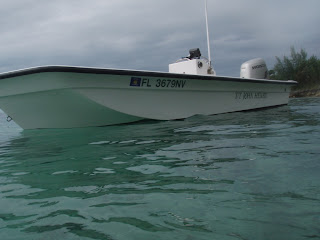 The weather started getting windy and cloudy on the forth day so we stayed another two days. 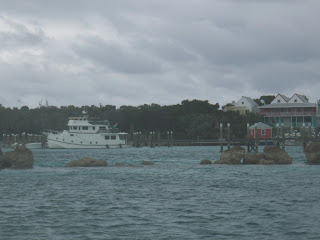 The shark fishing was fun. Wink fished for sharks about 3 times. He caught a total of 8 sharks during these adventures. Once he had the sharks on the line, they would jump about 3 feet out of the water trying to break free. It took one shark about 4 big jumps before he was free. We're glad that they broke free, we weren't planning to keep them anyway. 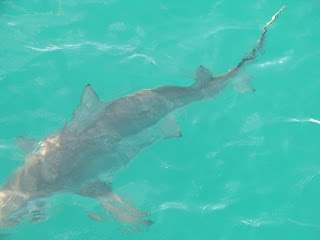 We had a beautiful rainbow and full moon on the evening that Double Trouble pulled in. Fred and Sidonia St. Germaine, owners of Double Trouble came in for two nights. 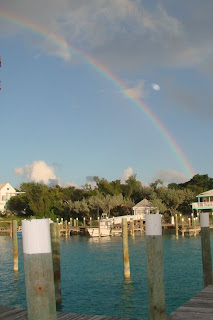 Sidonia and Fred with full moon to the right at Spanish Cay, Bahamas. 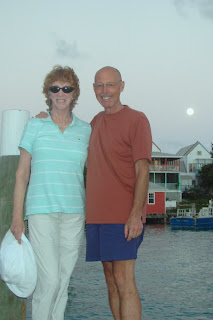 We became fast friends with Sidonia and Fred and all of us went snorkeling the last day. Wink was the fabulous hunter/gatherer again. We all tried, but we're inexperienced. Wink caught
4 lobsters, 1 large grouper, 2 large snappers. 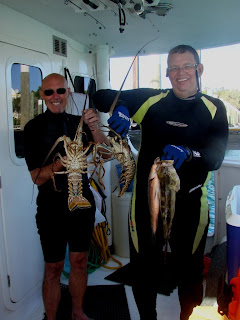 On Friday, Wink and Wilma pulled out at 0700 with Fred and Sidonia saying goodbye and helping us with our lines. Fred and Sidonia will leave later today for Green Turtle Cay and hopefully we'll catch up with each other again.
We arrived near the crossing of the Whale and requested local knowledge of Whale conditions.
The Whale is a dangerous area if bad weather conditions exist in the Bahamas that must be crossed or you must go through Don't Rock to move from the North side to the South side of the Abacos. We considered going through Don't Rock, but the sun was in our eyes and we couldn't read the water for shallow areas.
Local knowledge described good conditions in the Whale so we went through without a problem. We had 3-5 ft swells only. We were across in 40 minutes.
We had a nice day right up to the time we decided to dock at Boat Harbour in Marsh Harbour. Paul Graham and a group of other Royal Marsh Harbour Yacht Club members came out to meet us. Paul drove our skiff in so we could dock without it being in the way. An afternoon thunderstorm came in so we waited out on the bank for it to clear and winds to calm.
We were finally settled into our slip about 4:00 pm. 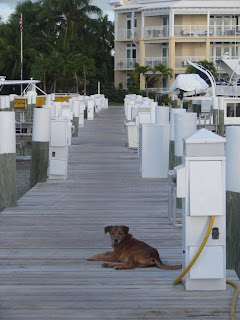 This our dock - Dock 4. There are local dogs that are non-aggressive called "pot cakes". Our marina has a very nice "pot cake" who like to hang around our boat. They are called "pot cakes" because they eat anything for anyone. Wilma has renamed this one to be called "Pot Luck". 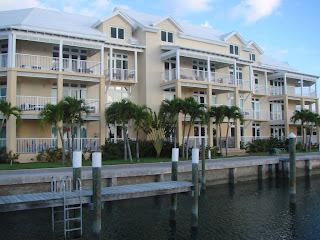 The condo complex that they were working on last year is complete. The Tiki Hut that was between dock 4 and 5th ave has been torn down.
Here is a coconut palm in the early stages of growth from a real coconut. 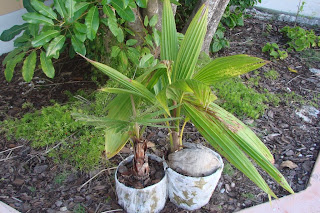 The Abaco Beach Resort at Boat Harbour is where our club RMHYC has negotiated a good rate. We have many nice amenities. Here's the local beach where you can relax in the sun and rent small kayaks. 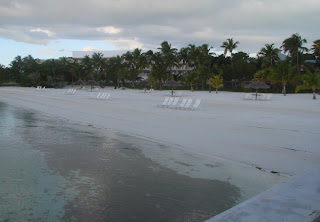 Below: this is one of the two pools. This pool is close to the restrooms and showers. It has a swim up bar that some people use. 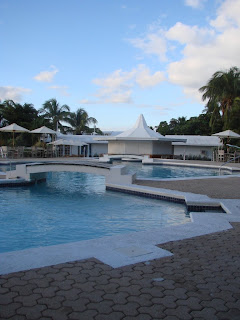 Our neighbor "Tar Heel" with owners David and Bettie arrived yesterday. Today, Wink took a picture of David on the top of his mast. It looks like too much work for me. 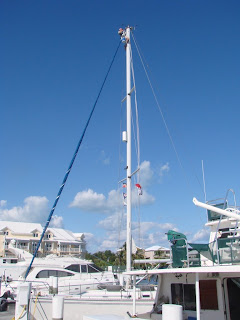