St. Augustine to Lake Worth, FL

Day 3 was November 3rd, 2008 - Here's Pokey as we pass them to regain the lead. After all, their name is "Pokey" they should be last. Actually what happened is our main navigation computer decided to fail - luckily Wink really believes in spares. We also have a small Garmin in the pilot house and a secondary computer we store in the saloon and if necessary, a copy of nobeltec is installed on my xp computer. 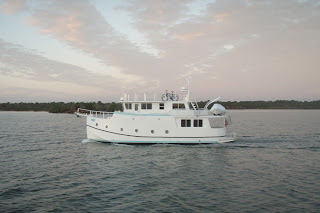 Pokey took the lead and made it a lot more comfortable for Wilma to drive (the garmin screen is only about 4 inches big, sorry small). While Wilma drove, Wink swapped out the main nav computer for the secondary computer. Wink thought that the power cable was loose and the problem, so he took extra time and hard wired the secondary nav computer in. This worked out great and soon Wink was back in the drivers seat passing at great speed (8 knots) Pokey allowing Wilma to take pictures.
Wink is the Captain, Wilma is the First Mate and therefore, Wink likes to drive - mostly because he can sit and work. Here's a great shot of the man in action. Driving. Of course, this is only one of his duties. Watch for more details. 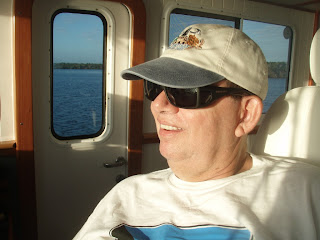 As we travel through the ICW (Intercoastal Waterway), we have to go under a great number of bridges. Many of them are shorter than John Henry so they must be opened for us. Only some are taller than our boat. I'll show an open bridge later, here's what they look like closed. Many of the bridges are "opened upon request" but some of them are on schedules. It's good to plan ahead, especially for the scheduled ones because being too close in windy conditions can be dangerous. We like to hold back quiet a distance while waiting even if the weather is great! 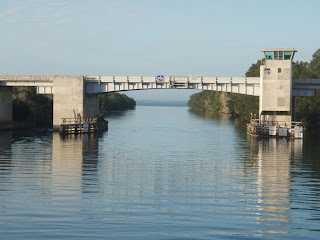 The Haul Over Canal. We can lower our anteneas shortening our maximum height of 32' down to 23' which gets us under the Haul Over Canal. This canal is only about one mile long. We drive as slow as possible and what a delight to go through on a weekday when no other boaters are present. This is one of our favorite places to visit and the visit is very short. 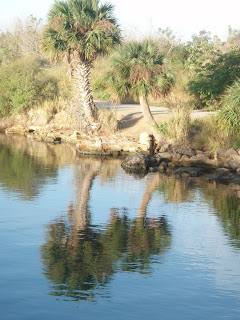 Haul Over Canal - Beautiful reflections in the water. 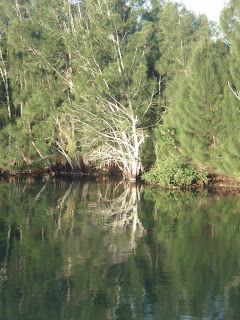 Another Haul Over Canal reflection. I wish I could paint this nice. 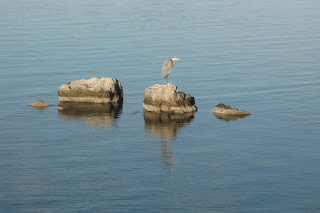 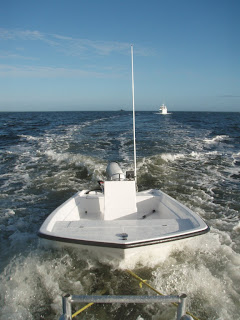 We shorten our towing harness on our new Mirage built skiff during heavy traffic areas or when we have to slow down and wait for bridges. If you remember last year, we backed over the harnesses freeing Ken Fickett's skiff. Wink had to jump in and swim for it. Hopefully, we've learned our lesson. Short harness when backing up or going very slow. Long harness when going faster. (Can't really use the word "Fast" and Trawler in the same sentence.)

We anchored overnight at Statue Mile 938 traveling a total of 76 miles for the day. We've anchored here many times. Winds were predicted at 3-4 mph. Key word - predicted!!!!
WE HAD 25-32 MPH WINDS. IT WAS HORRIBLE - John Henry came through the night wonderfully, but the new skiff, the line chaffed into. It didn't get away because we had three other lines on it, but it banged up the front of the skiff, the swim platform and the propeller of the skiff before we could set it on a longer lead line way behind the boat. The picture below show Wink cleaning up the skiff before the strong winds came in for the night. 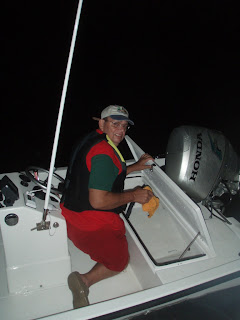 Both boats were eager to leave that anchorage the next morning. As there was no immenent crossing to the Bahamas, we unamously decided to travel only 27 miles on Tuesday, November 4th, 2008 - Election Day. We cruised to Statue Mile 965 south of the two Fort Pierce Bridges and anchors in a nice bay on the east side in front of a bunch of condo's. We went to lunch at Harbortown Marina - no charge for the dighy dock if you eat there. We had pretty calm waters and a heavy Horderve night on John Henry instead of dinner.

Tim and Becki tried out their Triumph Dighy - the first time out in it. 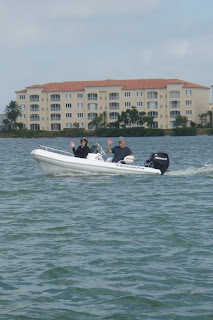 You can also see the condo's we anchored in front of- well only one of the buildings in this picture. We also went back to lunch the 2nd day. West Marine and Publix were only 5 blocks away and yes! we went there both days. 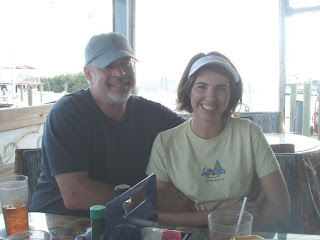 Tim & Becki Boehlke - Harbortown Marina Resturant
Wink decided that while the weather was calm, he'd work on the primary nav computer and get it hardwired and functioning properly. 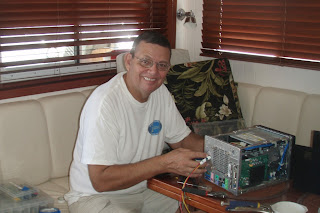 While Wink was working on more technical projects, Wilma tied leaders for the future Bahama fishing. Wink had purchased new hooks, but Wilma picked up some new swivels and a carrying case for better organization at West Marine. The West Marine in Ft. Pierce is amazing. Lots of stuff. We already had the lead weights and the 30 lb. line. 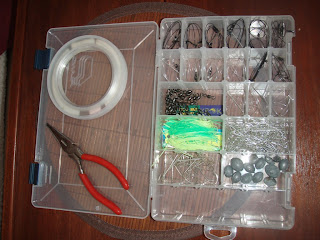 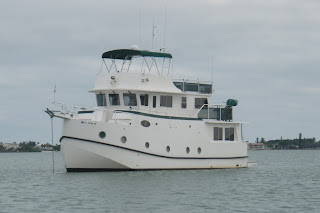 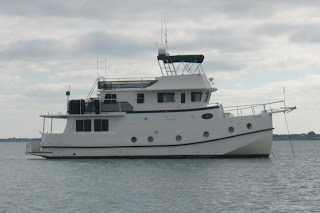 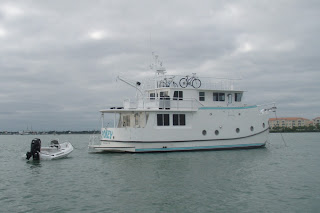 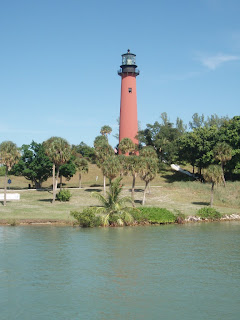 HAPPY ANNIVERSARY TO MICHAEL AND MARY ANN BAKER, ASSOCIATE MEMBERS OF THE GREAT HARBOUR TRAWLER ASSOCIATION.
If anyone would like to know more about Great Harbour Trawlers, built by Mirage Mfg. check out our association blogsite. www.greatharbour.blogspot.com
GH47 Trawler Pokey going under one of those bridges. Wilma thinks this is the Jupiter Federal Bridge. I'm not sure anymore. We went under 5 bridges today. 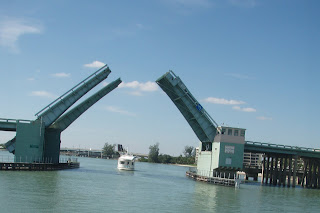 This picture seems a little tilted, not a photographers issue, I'm sure the boat was leaning a little, don't you think. 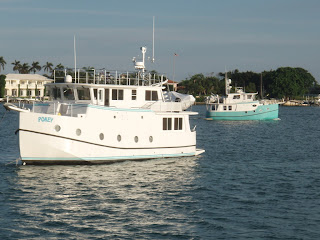 Pokey and John Henry arrived in Lake Worth, FL and anchored about 3:00 pm today. Paul and Sue Graham with GH37 Odessey (blue boat) were anchored in north Lake Worth. They pulled anchor and came down to south of Peanut Island to anchor with us. Photo shows Pokey and Odessey - looks like their coming and going, but Pokey is anchored and Odessey is coming in to anchor. 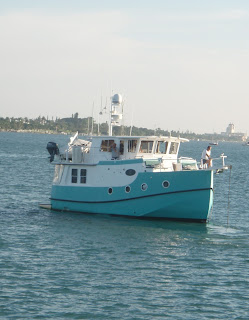 Paul and Sue on Odessey are anchoring for the night. Paul and Sue have their friend Charlie on board. He's making the crossing with them. He has a house in the Abaco's.
November 7, 2008 THE PLAN
GH47 John Henry, GH47 Pokey and GH37 Odessey will be traveling together.
At 3:00 am, Wink and Wilma on GH47 Trawler John Henry will wake up, rig for "silent running" that means stow away the last of the loose items in the master stateroom, and have a cup of coffee. At 3:30, all boat owners will review the weather. If all agree, we'll anchor aweigh at 4:00 a.m. travel out the inlet and see what the conditions are in the Gulf Stream. By 5:30 a.m. we should know if we want to continue or to come back to Lake Worth. If you don't get a blog posting on Friday, we probably went ahead.
Stay tuned to this blog for the answer to: Did they cross or not?
Posted by Wink and Wilma at 7:57 PM