Our friends Sue & Paul Graham gave us this photo taken on their way out of Spanish Cay showing that we had the marina to ourselves. A lovely memory of a great week. 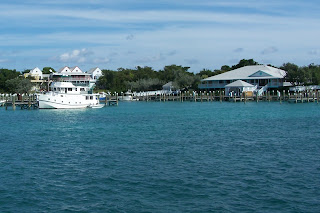 Once we were settled into Boat Harbour, we hired Vincent, a great local boat cleaner, to wash and wax John Henry. Wink and Wilma collected the floating platform that he needed for washing the bottom half of the boat. Wilma said that it was the easy water skiing she had done in years. 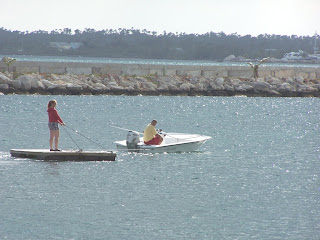 While we were settling into Boat Harbour, a young couple came by to check out John Henry. They had seen us coming in dock up the day before. Their names David and Denise Brook from Vancouver. They're on the look out for a live aboard boat of their own. They are renting a house here in Marsh Harbour for a few more months and we've become great friends.

Above: David and Denise Brook - At Nippers "I think". Below: Denise and their baby "Stella". 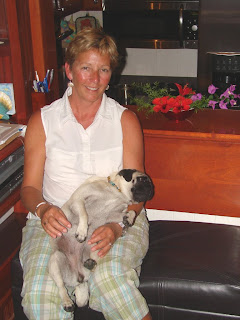 The Brook's came for dinner and brought the lovely flowers to her right. 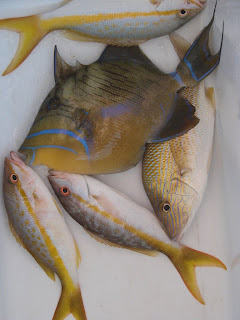 Earlier in the day Wink and Wilma went fishing so that we could have fresh fish for dinner. We
had two mangrove snappers in the freezer and we added our three yellow tail snapper, one grunt and the large Queen Trigger Fish, dinner was smash. 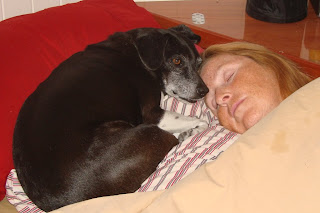 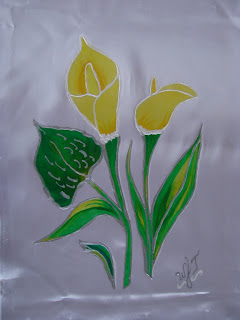 Wilma is attending Arts and Crafts on Mondays. Her first accomplishment, this silk Lilly painting. 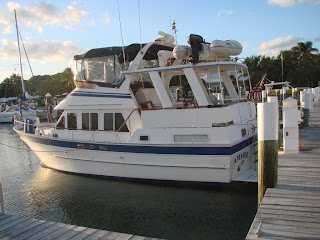 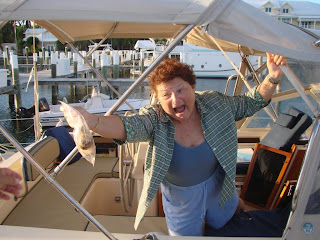 On Wednesday before Thanksgiving, Fred & Judy on Amarse (above boat) arrived first and then Fred & Sherrie on Chipka Fire III (bottom boat with Sherrie on it) arrived shortly after.
It is great to see both couples. Sherrie was so excited when she received the Lobster Thank You payments for swapping boat slips. We're currently in what would have been Chipka Fire's boat slip, but the kind and generous Fred & Sherrie are helping poor Sara the sea dog out.
Wink and Wilma went out snorkeling and lobster hunting several times since arriving at Boat Harbour. Wink has seen lots of Lobsters - he's starting to get the hang of hunting again. He's so agile in the water and he's a great hunter/gatherer. We are eating a lot more fish and lobster than red meat. 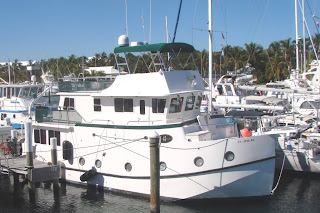 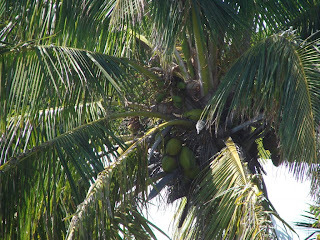 The coconuts are plentiful at Abaco Beach Resort. Everyday, Wilma goes for a walk with Sara, the sea dog, she brings one back to the boat. Suddenly, there were nine coconuts hanging out in the cockpit. Wink was a treasure and cleaned the the husk from the nuts and drained the coconut milk while Wilma cleaned the meat from some of the coconuts. Sue Graham made us a loaf of Coconut Bread as we shared our harvest. 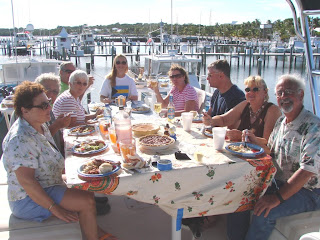 With a clean and shiney boat, our harvest of coconuts gathered, we celebrate Thanksgiving with our friends who have just returned back to our Winter Family. From the left going around the table - Sherrie & Fred from Chipka Fire III, Sue & Paul from Odyssey, Wilma at the end, Janet & Ken (Sue's daughter and son-in-law) and Judy and Fred from Amarse. Wink sits at the head of the table and is the official photographer.