Great Harbour Trawler Goes Fast - we cruised 107 Statue Miles yesterday with an average of 9.034 mph. We had the wind at our backs - pushing. We traveled with the current and Lady Luck was being nice to us. We approached Jacksonville Landing near Sunset. 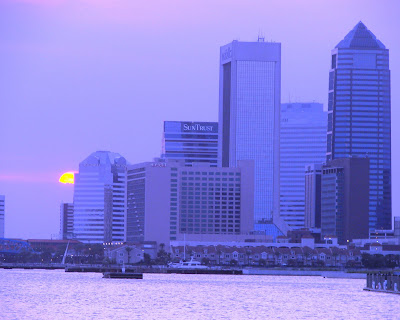 Wilma prepared John Henry for docking. Bow line, Forward Spring Line, Aft Spring Line, and a Stern Line all to Port. Five Fenders were arranged for Floating Docks. The skiff was brought in to Anchor/Docking Position. Wink wanted to dock Port side so the bow could be into the current. Wilma went to her station at the stern, opened the gate - Wink performed a perfect about face and gently landed the vessel along the floating dock - Wilma stepped across to the floating dock, retrieved a spring line from Wink and secured the boat to the floating dock.
Wink and Wilma deployed the Bow Line, Aft Spring Line, and repositioned the Forward Spring Line, Stern Line and finally the Skiff. Shane (a passerby) came by and assisted with the Skiff. He's been dreaming about having a trawler and hopes to do the Great Loop when he retires in 12 years. His wife, Brandy - I believe - joined him and we gave them tour of John Henry. 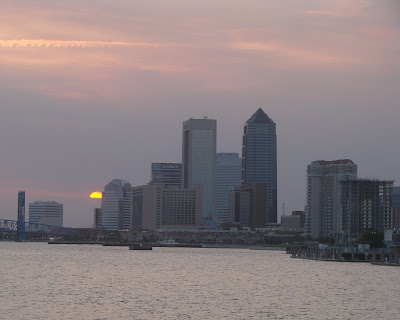 Wink and Wilma arrived at Jacksonville Landings about 8:40 pm just after sunset but before the light was gone. 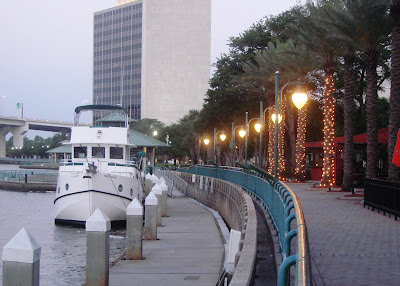 Beautiful photos you have shared. Great buildings too.