More Happenings in - Bahamas (The Abacos)

In February, Man-O-War Cay sponsors a flea market and invites anyone to participate. All marketers table fees are donated to the local schools. 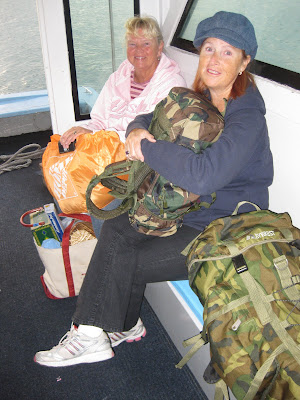 Wink and Wilma went with Judy from MV Amarse on the Ferry to Man-O-War because the winds were blowing strong. At the flea market, we had to build a barricade to keep our wares on the table. Wink and Wilma were selling the wire-wrapped jewelry that Wink creates and Judy sold her jewelry and cigar box purses. We met our friend Sue from MV Odyssey there also. She had her jewelry and shell decorations for sale. 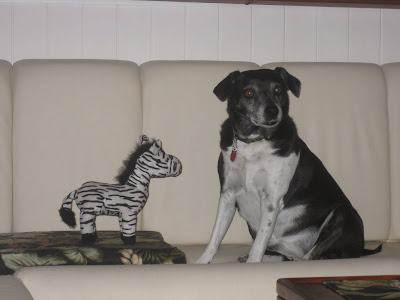 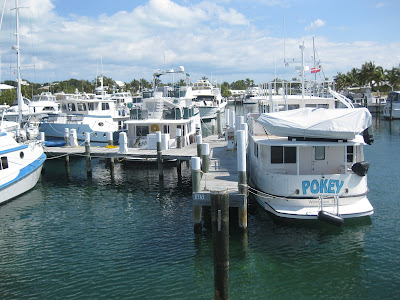 The dock was getting empty near the end of March. Double JJ, John Henry, and Pokey are the last Great Harbour's on Dock 4. Double JJ left shortly after this photo. Silver Queen, another Great Harbour also left the day before we left. Pokey was left all alone, but only for a day - Becki and Tim flew in and met us at Manjack Cay. 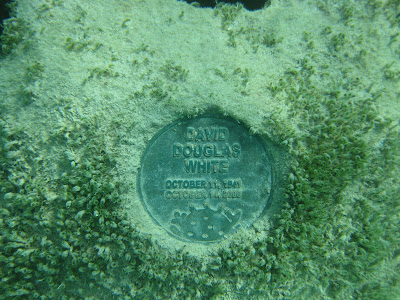 Our niece Lee Ann came for a visit the last week we were in Marsh Harbour. We went to Mermaid Reef for snorkeling. I had never notice before, but this year, they had memorial plaques where you can have your loved one's ashes buried into a reef. Wink photographed this one and I was truly surprised by the name on it. Both my cousins (David and Curt Douglas White) have passed away years ago. It's a good reminder of them. 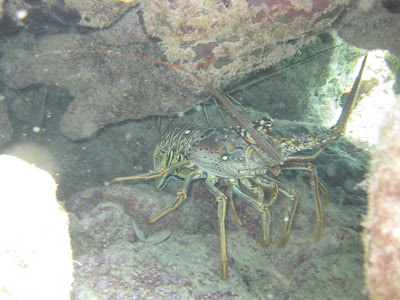 The weather this year in the Bahamas was like the rest of North America - colder than usual.
Wink was able to only get a few lobsters before the cold set in. This little guy seems to know that he's in a "no take zone" and posed for his picture. 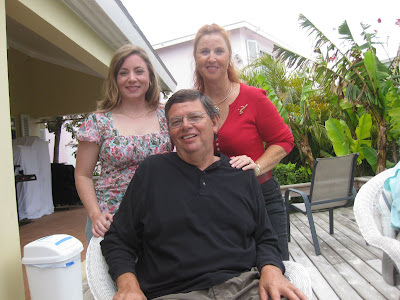 Lee Ann, Wilma and Wink
taken at a BBQ put on by The Silver Foxes. 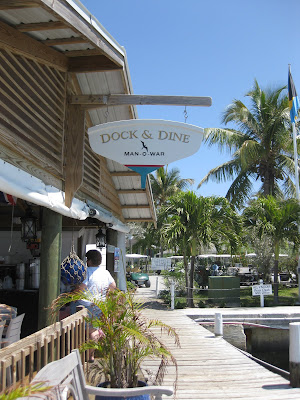 On the nice weather days, we would occasionally take the dingy out to Man-O-War
and have lunch at Dock-N-Dine. 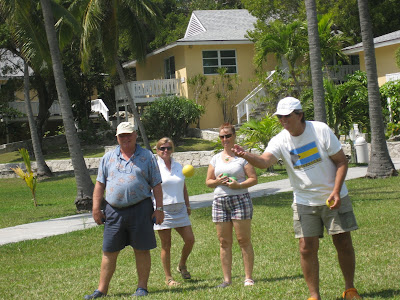 Wink played Bocce with the guys every week in Marsh Harbour.
After the majority of the boaters left for the season, three couples
decided to have a couples play off .
Above: S/V Tally Ho: Andrew and Vanessa
M/V John Henry: Wink and Wilma
Taking Photo: M/V Roving Seas: Jan and Brian
Surprise - Each Team won once. 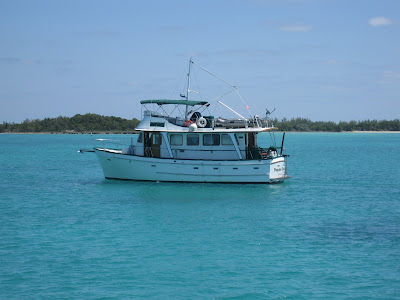 M/V Peeples Choice: Paul and Claudia
traveled with M/V Roving Seas: Jan & Brian
and us on M/V John Henry
from Marsh Harbour to Manjack Cay when we left on April 2, 2010 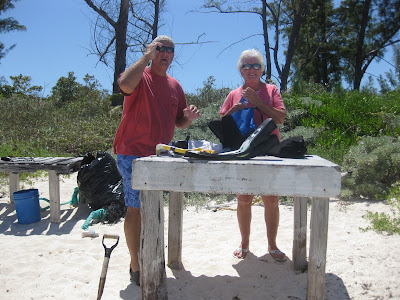 Once we anchored Jim and Kathy from M/V Fennders arrived on their skiff,
their boat was docked at the Bluff House on Green Turtle Cay.
All four groups of boaters went ashore and enjoyed the walking tour to the Ocean Side Beach.
Manjack is a privately owned island, maintained well and generously allows boaters
to enjoy the island - with maintained paths, and clean beaches. 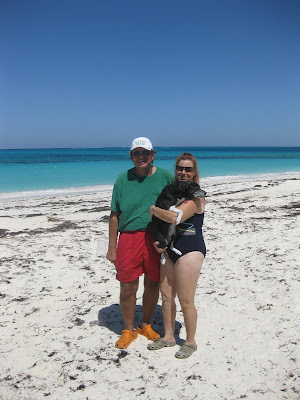 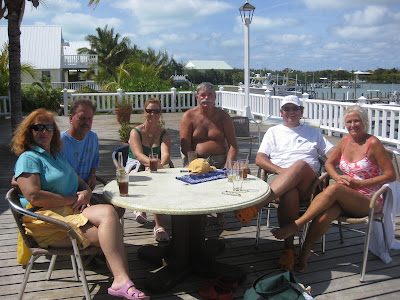 Our second day at Manjack, the three groups decided to go over to Green Turtle Cay
and check out Bluff House for next season. They are offering RMHYC members
a deal starting next August and we wanted to confirm our boats would
fit into their slips. Everyone enjoyed a drink at the bar/deck. 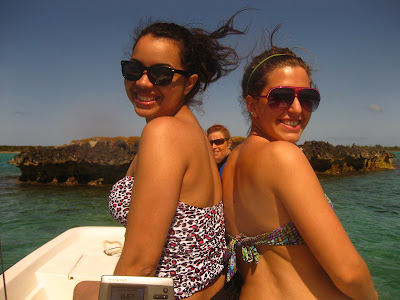 Lexi and Clarissa
from M/V Pokey caught up with us in Manjack
and cruised with us to Allans-Pensacola Cay and Grande Cay.
Wilma's in her dive suit in the background.
Wink's driving the boat.
The girls are graduating high school this May.
We had lots of fun with them. 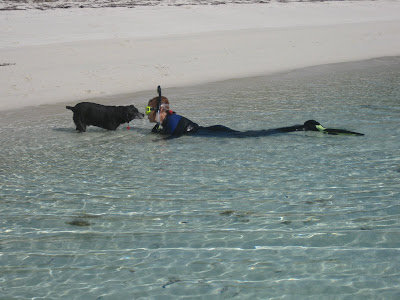 Sara the Sea Dog and Wilma in her snorkel suit.
Wink towed Wilma behind the skiff at the end of the day.
Wilma found and caught 6 Conch (The Limit) 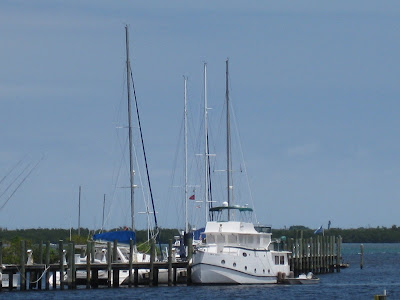 John Henry at Fort Pierce, FL
Harbortown Marina
THE CROSSING
At 5:00 pm - a vote was taken, M/V John Henry, M/V Pokey and M/V Roving Seas
left the bank at Grande Cay and went into the Atlantic Ocean.
M/V Peeples Choice had departed from us as we all left Manjack heading for Allan-Pensacola.
It was a night crossing - John Henry' radar decided not to function,
no worries -we're traveling with two other boaters.
Our depth sounder also stopped working - no worries - we're in deep water.
The weather was predicted with east winds - 2-4 ft waves.
We should have a nice push across the Gulf Stream.
THE REALITY: Waves were 4-6 ft. sometimes more - the skiff was surfing down waves, jerking on the boat -worrying us that it would come loose.
After line lengthening, things were better until 4:00 am.
Once line came off the skiff (good thing we tow with two lines )
We contemplated putting the line back on - Not Happening!
We decided we might loose the skiff.
Fortunately, we all slowed down to 5-1/2 knots and made
it in to Ft. Pierce at 9:00 am with the skiff in tow.
Pokey and John Henry took a dock at Harbortown Marina while Roving Seas continued 15 miles up the ICW to their destination - Vero Beach, FL.
Posted by Wink and Wilma at 3:50 PM