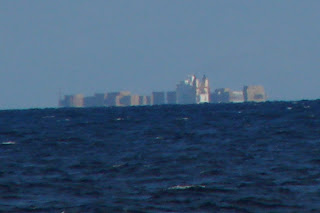 Correction to blog: I accidently included this picture in the previous day's blog. It should have been in today's blog. We passed it on the crossing of the Gulf Stream.
Sunday, January 13, 2008

We raised anchor at 4:30 am. Wink and Wilma put on their headset radios and Wilma, utilizing her night vision, went out on the bow giving directions to Wink. Sea Dee followed John Henry out of the Inlet and over to the Bahamas. The seas were fine with 1-2 ft chop until about 10:00 am and then the waves organized and we took them on the beam at about 3’. Wilma fished a couple of time, but no fish were interested.

Arriving just south of Memory Rock about 11:15 am and thoroughly enjoying how the water changed from dark blue to teal; we spotted nearly a dozen sailboats ahead of us. Several sport fishing boats were also enjoying the day. Both crews were tired about 2:00 pm and we decided not to continue to Great Sail Anchorage, but to stay East of Mangrove Cay (pronounced KEY) where anchoring in 6-7 feet of water was not a problem about 3:15 pm. 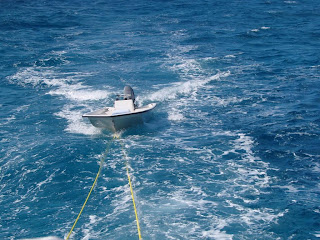 John Henry towed this 15 foot skiff across to the Bahamas. This is great picture of how blue the water color is and how well it towed.
Wink and Wilma spotted several Coral Heads forming on the east side of the island and took great care in not anchoring over them. Wilma was able to make several calls on the satellite telephone to announce their arrival in the Bahamas (a long time dream come true), but all calls were cut short.

Wink, Wilma and Sara the Sea Dog went to the fly bridge to enjoy the sunset.
Posted by Wink and Wilma at 10:09 PM