We were up at 6:30 and a weighed anchor at 7:00 am. We had a small computer problem (batteries needed changing in our keyboard) so Sea Dee took the lead. 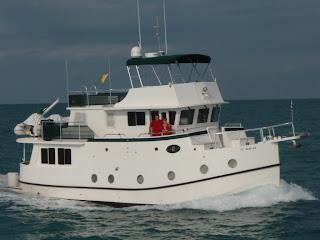 Annie took this photo of John Henry, Wink and Wilma as we passed them to retake the lead across to Spanish Cay.

About mid morning, a sailing catamaran name Calypso joined us on our travels to Spanish Cay. They will eventually end up in Marsh Harbour as well – so we’re sure to see them again.

At Spanish Cay, it’s the light season and so there is only one other boat there when the three of us arrive. We all get cleared by customs, then meet up at the Marina office/store for registrations and visiting. Richard, the dock master, tell us there is great fishing right in the marina for snapper. Since its low season, help ourselves. He also mentioned that there were several sharks and one 16’ bull shark, named Bruce.

Andy chummed the water and the fish came a swimming. Wilma caught enough snapper to cook and serve four for dinner. Annie is the official “Paparazzi.” Wink fished and caught shark after shark, having great fun, fun, and more fun. The sharks ranged from 5-8’ in length. One shark had at least 4 hooks around his mouth. Wink tried to play dentist and remove a few, but after getting a good look at the shark’s teeth decided that one more hook would just increase the sharks awesome looks.

After dinner and fishing, we adjourned to the Marina lounge to socialize and enjoy our land legs. Wink was challenged by Richard to a game of shuffle board, once accepted it was clear that Richard was the PRO! With only three people living on the island permanently, Richard has lots of time to practice.

It was a late night of exceptional fun and entertainment. On Tuesday, it was an early morning for Wilma and Annie. Wink and Andy needed a bit of extra sleep time. Wilma and Annie continued fishing for snapper throughout the morning. Sara, the sea dog, was happy to know that we had reached land and would let her run free on the beach. 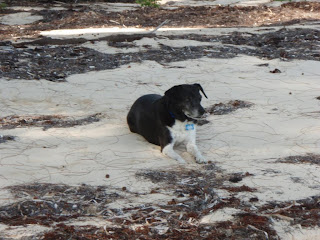 We were having such great fun, that we decided to stay another night at Spanish Cay. We toured the island from tip to tip on a marina golf cart. At the southern tip, we found a deserted beach and it was loaded with conch.
With a six conch limit in hand we headed back to the boat to retrieve our fishing gear because there seemed to be lots of bonefish available.

Wink spoke to Richard regarding Conch extraction and preparation. Richard, not only is the dock master, but the chief cook as well. Richard helped with the conch, turned it into a great Conch Salad (Sevetchie) which we had for h’orderves. Richard had also made a Chicken Curry for lunch and offered us a plate. It was great. 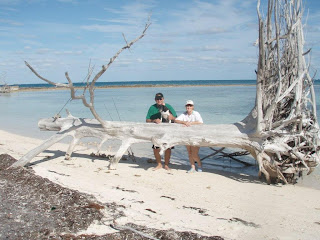 Wink, Wilma and Sara had a great afternoon at the beach with Annie. Annie still playing Papparazzi documented the bonefishing outing.

Back to the beach with gear in hand, we fished and fished, but to no avail, the bonefish had gone away. Annie picked up six conch for Sea Dee limit and Wilma picked up another conch to re-instate her limit, we headed back to the golf cart. The conch was migrating toward shore and was living in the shallow water. We counted 61 in the shallow water after our legal limit was taken. 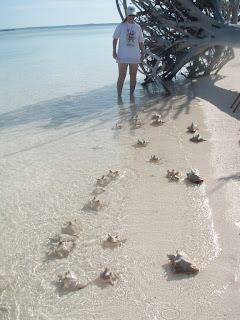 Wink looked around for one last hope of finding the bonefish and there they were. We donned our gear and went back into the water. 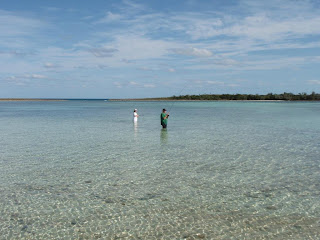 Wilma on right and Wink on left, fishing for bone fish in the south beach area of Spanish Cay, Bahamas. Within minutes Wink had obtained his goal of having a bonefish on the line. 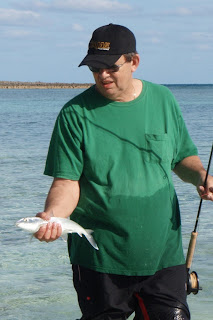 Annie took some great photo’s of the memorable event. Wilma did manage to get a bonefish on the line, but under estimated the power of the bonefish and the fish broke the line. 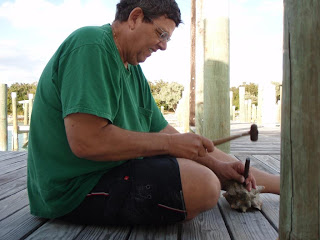 Returning to the boats, Wink and Annie cleaned our conch while Wilma cleaned up all the rods, reels and fishing area (cockpit) from the day before. Wilma prepared the galley for food preparation while Sea Dee’s crew completed their laundry and household chores.

Andy’s bow thruster is not working for some reason, Wink takes a look, but to no avail. Bruce, the 16’ bull shark, circles our boat a few times. He’s very impressive. We had a late dinner of Conch Salad (Sevetchie), Baked Snapper, Garlic Sauteed Snapper and Fried Snapper, along with Grits and Hush Puppies. It was an early night as both boats planned a 7:00 am departure.
Posted by Wink and Wilma at 10:18 PM

Hey Wilma and Wink, keep the updates coming. It is almost as good as being on the boat with you. Be safe, Bull Sharks are very nosy with a few sharp teeth close by.