There was so much to do on Spanish Cay that I wanted to include more pictures.

Annie or Andy from Sea Dee took this early morning light picture of John Henry on the way to Spanish Cay, Bahamas. 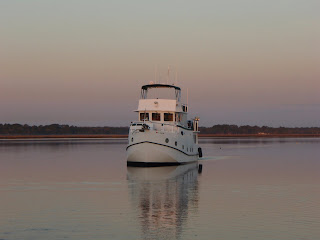 Wink bringing in the shark with multiple mouth piercing (ya know, hooks). 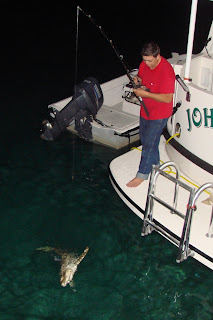 Wink cast netting for bait from one of the docks at Spanish Marina. Annie is in the foreground. 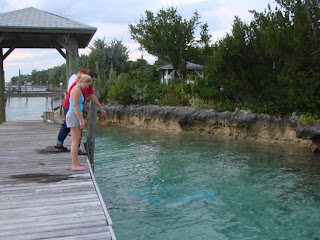 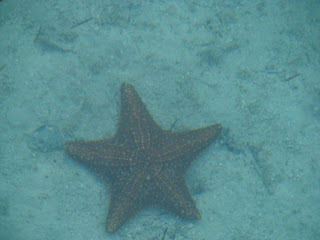 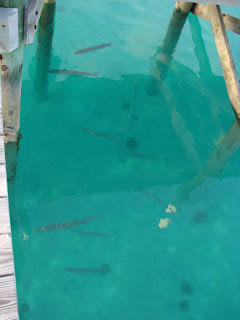 Finding the conch was a big treat. Wink plans to make a conch horn on the weekend. 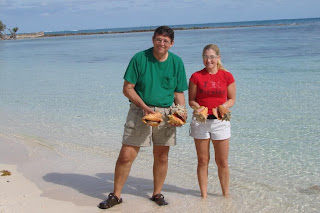 John Henry and Sea Dee left the dock at 7:00 am right on time. It was a pleasant ride and Wilma prepared for “Silent Running” as we approached The Whale. With local knowledge and high confidence, we entered The Whale at 10:00 am and emerged about 30-40 minutes later. There were 4-5 foot seas in The Whale and “Silent Running” was achieved. Another couple of hours and The Whale will be closed due to weather. The water here is amazingly clear and the color is magnificent. We chatted with several boaters on the way here whose names are Emerald Bay and Sapphire. The boat names can only give you a clue as to how wonderful the water is. 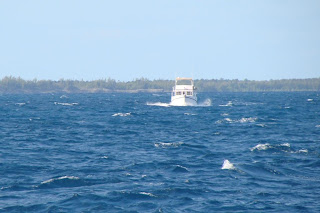 Sea Dee is crossing "The Whale". This is an area southeast of Green Turtle where the seas organize furiously when the winds are from the right direction. More shipwrecks happen here than in all of the Bahamas. The Whale closed in the afternoon due to weather. We were truly blessed to have such a smooth crossing.

We arrived at Marsh Harbour about 12:30 today at high tide with winds about 10-15. Wink did an excellent job of stern docking. All of our friend and their friends turned out to be dock hands and all lines were secured. Thanks to all the good hands. 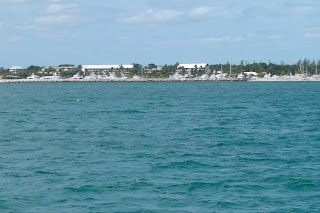 Marsh Harbour on the way in. We're docked about (*) straight up on picture.
The group waited for us so we could all go to lunch for Burgers. It was a 6 minute walk to the Burger place. Wink was especially happy to have some beef.
Wilma has been getting up early both Thursday and Friday and went walking with the Ladies. It's about a 4 mile walk everyday. Wink and Wilma also did a 4 mile bike ride to see what the town had to offer on Thursday afternoon.
There was a birthday party for someone on the dock Thursday night and everyone bought a pot luck dish. It was great. We have met so many people in such a short time.
Talk to you tomorrow.....

I cannot believe all the conch. I have never seen anything like that!

We had a conch shell blower at our wedding! They call it the Pu in hawaiian. Check out this link

Wish we were there!