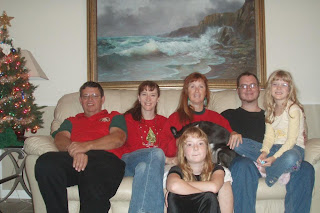 Christmas at Sarasota with Family. From Left: Wink, Toni, Wilma & Sara, William & Emma, and Amber is sitting on the floor in front.
We returned to our condo in Sarasota, FL to prepare for Christmas with the family. As all our holiday decorations are in storage in Texas, we decided to (you guessed it) buy more. We decided on a smaller tree in the 2 foot range and put it on an end table, decorated the entertainment center with lights and stockings and wha la! It’s Christmas time in the Condo….
We scampered here and there and bought presents galore; in the mean time, Wilma also scrubbed and sealed the tile floor.
Wilma’s son William flew in from Dallas, TX on Friday before Christmas. The grandchildren and their mother, Toni drove over from Delray Beach, FL on Saturday.
On Sunday, the whole family went fishing right off the retaining wall of the condo. Emma our 8 year old granddaughter caught us bait with her new cast net that Grandpa gave her for Christmas. Everyone caught at least one good fish to eat – so we had fried fish, hush puppies and grits for dinner, what a treat.
Santa came without delay and left lots of gifts for Christmas Day. We had a great big ham and apple pie for the big meal of the day. We put William on a plane on Wednesday after Christmas, sent Toni back to Delray Beach, brought the Grandchildren back with us to Green Cove Springs, then Wink went to Jacksonville airport to pick up his brother and family who came to stay for a week. We also had another set of friends on board that week also. With a grand total of 11 people and 3 dogs visiting at the same time. 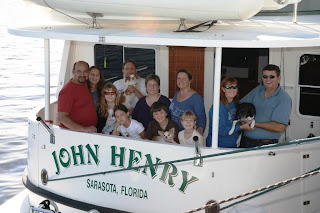 Above -From left and around to the back: John, Tara, Amber, Don, Amy, Stephanie, Wilma, Wink and Starting at the H in Henry: Bella, Craig & Emma
Below: Wink's brother John and his wife, Stephanie 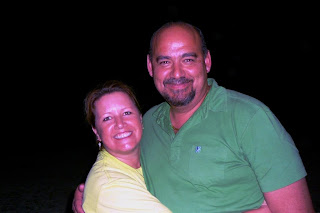 My new sister-in-law Stephanie wrote a nice journal about their visit from her perspective, so I’ve included most of it here in the blog. Enjoy.

We arrived in Jacksonville December 26th (felt like Christmas day) ready to play and have some fun on Wink and Wilma’s big beautiful boat, “The John Henry”. And Fun it was!

Amber and Wink greeted us warmly at the airport while Wilma prepared the John Henry for our inaugural cruise. The spaghetti dinner was delicious and the sleep was fantastic the first night! Come to think of it the sleep was great every night!

We started the fun with a night at the Reynolds Park Yacht Center’s Winter Lights Festival and Ice skating! Tara, Craig, Amber and Emma skated for about an hour! So cold, so incredible! Emma sure picked up the technique fast! Amber just loved the bouncy houses! 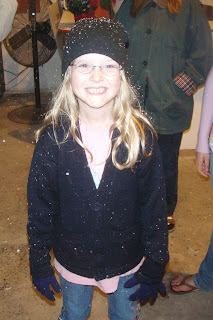 Emma was ice skating and then she stood in front of the snow making machine. That's the only way we Floridian want snow..... Emma said.
The next morning we were off to cruising the St. John’s waterway. The weather was fantastic. The water was like glass, air temp in the 70’s. So, so nice! We “newbie’s” on the yacht took in all the details from the beautiful blue water to how comfortable it was. Craig enjoyed the fly bridge… so did I! We found out quickly that Wink was spying on us through his video monitoring system. I’m sure all he heard was how incredibly fortunate we were to get to have such welcoming relatives as Wink and Wilma. We had fun conversing with Wink over the intercom. He narrated the journey along the way as if we were on a tourist cruise.

We cruised a little East of Jacksonville the first night, and called it a day. We pulled out the fishing gear, only to note the “catch” were all too short. Lots of throwbacks….but fun, fun, fun! I have to say, fishing was one of the big highlights for all of us. I don’t remember the last time I fished with a group this big where everyone was having so much fun. Needless to say, we kept no fish that night. But we did pull up some interesting sea life. Craig caught a real cute little eel. I caught a puffer fish. Wilma picked it up to remove it from the hook and return it to the water and when she touched it, it began to blow up like a balloon – that’s why they call it a puffer.

Since we didn’t get fish, our alternative dinner was easily just as yummy… Winks famous Fried rice! We forgot all about the missed fish. 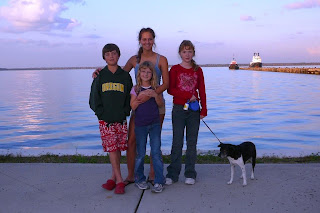 Craigie, Tara, Amber and Sara the dog with Emma up front at Reynold Park Yacht Ctr.
The next day we cruised out offshore to the good fishing spots. We were very patient, so patient, then bam! One hit after another we all caught lots of fish! Whiting, Gruper, Trout, Key West Grunts, Black Sea Bass and many throwbacks! That Wilma, she is not only a great hostess, she can fish too! We were all salivating at the anticipation of Wilma’s fried fish, hush puppies and grits! Craig said he could have fished all night! We had to go in because we needed to get to the next sleep spot before sundown. The Ocean was just beautiful! We even saw dolphins! I would have killed to swim in the Atlantic Ocean! It was just breathtaking.

We cruised north of Jacksonville in the afternoon after the Atlantic outing. We anchored in a beautiful waterway called “Sister’s Creek” Appropriate for our new “sisterhood” between Wilma and I. The water was calm, just an amazing view! We only had one sailboat anchored near us. We no sooner shut the motor off and cast our rods in the water to catch more fish. We weren’t as lucky as we were in the ocean. Still so fun! We caught lots of Blue Crabs, Wink didn’t really want us to “fish” for them. He tried to warn us on how laborious the meal is to eat. We didn’t care because we thought we were going to catch a million of them. We didn’t. We ended up with only two. Craig pulled them both in. Wink threw them out…

Wink grabbed John and I out of bed to show us the bright celestial sky.
Day three…..cruised home to Green Cove Springs. Met up with John’s college buddy Don and his family (Amy and Bella) for dinner at a great fisherman’s restaurant in Orange Park, “Sam’s St. John’s Seafood”. It took a little doing to find a place to eat. The food was real good, but the hushpuppies were no match to Wilma’s!
Emma and Bella just met, but have gotten along great and decided to become pen pals! 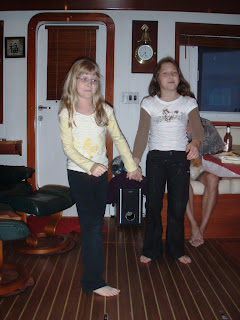 Day four… John, Tara, Craig and I took off to Sarasota to see all the relatives!
We were so lucky to get to spend the night at Wink and Wilma’s beautiful condo in Sarasota. We kayaked, fished, and walked on the most beautiful sand in Siesta Key! Felt like we were walking on a bag of flour. So soft! We had a fantastic lunch at the Lobster Pot.

We arrived back in Green Cove, on New Years Eve! Wow! It was a great party at the yacht club. Wilma and I did a little Hula Dancing lesson. Bettie and Wilma did the Electric slide. John took the kids all over to the Karaoke music at the Reynolds Park Yacht festival. We rang in the New Year with all the boaters, and all the kids. Lots of fun! Lots of good spirits! We stayed up till 2:30!

We sang Happy Birthday to John at midnight and Celebrated his 48th birthday the next day with a wonderful German Chocolate cake that Wilma & Amy made. MMM MMM good!

On New Years day, we went to St Augustine. We toured the Castillo de San Marcos Fort and swam in the Atlantic Ocean!

Our final evening on the boat was the only day we felt any climate change. The wind started blowing. It must be time to go home. Wilma once again, fixed a great Birthday dinner for John. We indulged in the cake with about 12 guests… right before dinner! Wilma figured the cake wouldn’t be as many calories if we ate it before dinner! It was good! So we ate it after dinner, too!
Thank you so much Wink and Wilma! You’re the host and hostess with the mostest! I just love my new Brother and sister in law! Thank You, Thank You, Thank You! You’re the best!!!!
Posted by Wink and Wilma at 11:53 AM