It's been another great week in the Bahamas!

Reminder:
As I mentioned in a previous post, we had double duty visitors. Our walk-about friend Denise Weston from Australia arrived on January 31 while our Dallas Power Squadron Friends, Fred & Phyl were finishing up their wonderful visit. Denise's adventures so far have been posted as a good start.
Double Duty Again - Our friend Richard, the chef from Spanish Cay came for a few days while Denise is here. Denise gave up her room because Richard is a bit bigger than she is. Denise relocated down to the spare bunk room for two nights. We had turned that room into an additional pantry so it turned out to be convenient for midnight snacking.
Richard doesn't get many days off from his island life on Spanish Cay, so when he takes a few days out, it's a challenge to do all the things he wants to do. We gave it a good "go for the money" and had a lot of fun.
Our first night out with Richard, we went to dinner at SNAPPAS, a local resturuant only about a mile from the resort. Even though Richard is from Spanish Cay, he seems to know all the locals in Marsh Harbour as well. We spent the evening dining and dancing - what great fun. 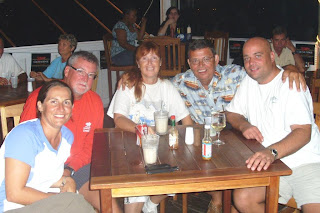 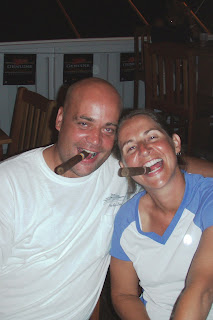 Richard and Denise checking out the Cuban Cigars that Richard had acquired, as a gift while we were at dinner, a few cubans so everyone tried them out for looks.

The next day, on this is an amazing life, Richard rented a car and we all drove to Little Harbour at the far end of the island. We went to Pete's Pub a great little isolated cabana that's outside on the beach (bring your dog, but keep on a leash kind of place). We should have brought Sara, but didn't know at the time.

Denise and Wilma in the back with Richard and Wink sitting at Pete's Pub. 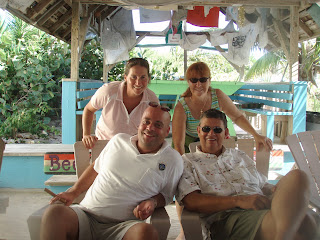 We had a nice lunch and lots of relaxation just walking the beach, seeing the sites. It's so isolated and quiet. Richard decided that he liked the slogan on the Pete's Pub Tee Shirts so off he went to buy one. The only size they had fit Denise. "Nice meet'n ya, Denise", said Richard as he tossed over the shirt. Front View - Pete's Pub Tee shirt. 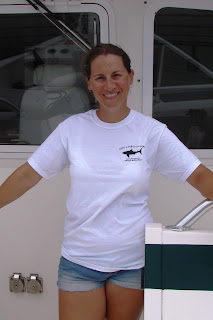 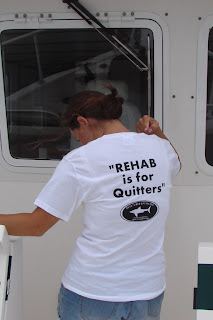 Wilma and Denise enjoys the nice day at Little Harbour. 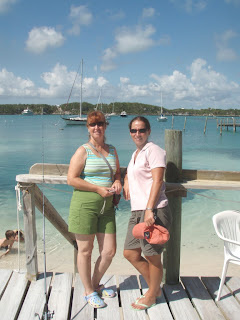 The next few pictures are Great views from Little Harbour. 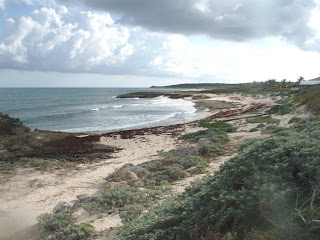 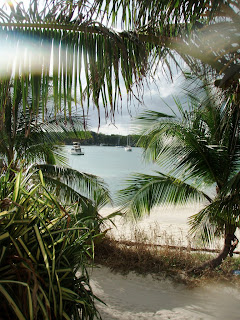 Sara, the sea dog, had a day at Mom's Spa. Wilma gave her a welcomed bath, trimmed her nails, cleaned her ears, and gave her a needed dental treatment (both scaling and scraping). Sara has a puppy perfume that relaxes and refreshes not only the sea dog, but the owners as well. 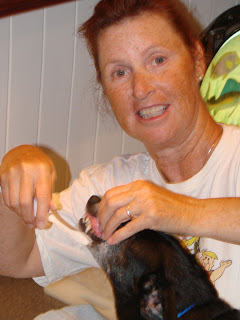 After Richard left, the weather started on a bit of decline. The temp has been pretty good, but the winds and some rain have started. Last night the winds reached 49 mph at times. Everyone was out at all hours checking their lines and fenders. Denise had a flight out this morning so we said our goodbye's and wished her well at 6:00 am which means we were up early today. 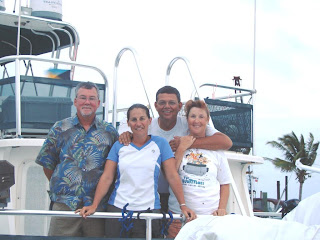 Hey Wink – how are you? (A silly question based on the photos in your blog, I especially liked the Cuban cigars!). It looks like the John Henry lifestyle suits you just fine – congratulations! You have helped me define what I want in my own retirement!

If you have a minute shoot me an email or give me a call.