A Memorable Day in the Bahamas

This week we have had a couple of major events. First, we all went out to dinner at The Jib Room for a rack of ribs to say goodbye to Jim (Andy's guest) and to check out the Lunar Eclipse from the outside eating area. 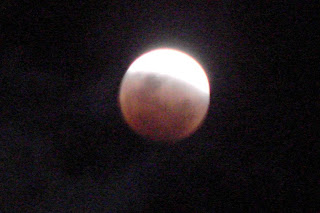 Earlier that day, we celebrated birthdays as Thursday, February 21st, it was Wilma's son's birthday. Happy Birthday William. It was also Andy's guest Jim's birthday and another friend who's here, Brian. Happy Birthday to all. Wilma made a nice German Chocolate Cake to celebrate - so sorry William couldn't be here to eat it. 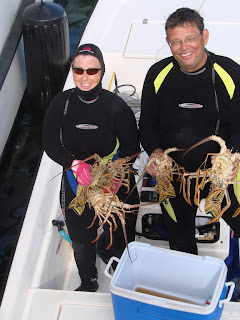 Then on Friday, the weather was really blowing with seas about 2 feet. Wink and Wilma donned their wetsuits and decided to give it a go. Thanks to the skiff, we didn't have any problems heading out to what is now a new secret location where Wink found and speared all 5 lobsters from a total of 9 lobsters seen that day.
Wilma was handy in taking the lobster back to the boat while Wink fought other lobsters. Wilma also was the life guard lookout and safety officer because snorkeling or scuba should always be done in pairs. Several times Wink would snorkel pretty far away and Wilma would up anchor and drive the boat to him to keep from back tracking. 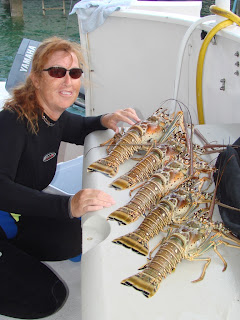 From largest to smallest, Wilma enjoys the bountiful catch of the day, a day that will be hard to forget. 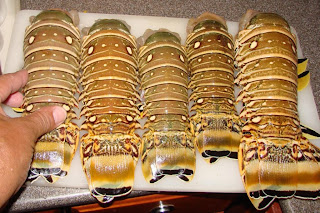 Wink cuts the lobster tails off and we put two in the freezer for later. Wink, Wilma and Andy enjoys lobster and fillets for dinner. 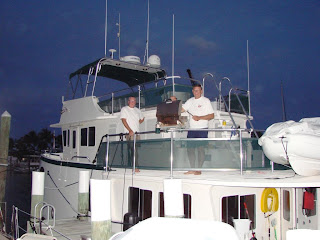 Wink and Andy decide to BBQ the dinner. Wilma get a night off from cooking, but not cleaning.
The last event of the day on Friday was a nice game of Apples to Apples. We had 14 total in our saloon. Several people brought snacks and a good time had by all. (I'll try to get a photo from one of the guest for next session).

We're happy to be able to keep in touch with guys! Terrific blog! The Easterwood's