Friends and Food in Paradise!
Fred and Phyl Denton arrived from the Dallas area of Texas for a weeks visit. Fred and Phyl taught Cruise Planning at the Dallas Sail and Power Squadron where we are members. They also have a sailboat in the MED named “Perception”.

During their visit, we went trolling, snorkeling, biking, walking, eating out, and fishing. All were great fun. We even took John Henry out for a spin and Fred took the captains chair while the crew did a little fishing. Andy (Sea Dee) came along for the day and everything was enjoyable. 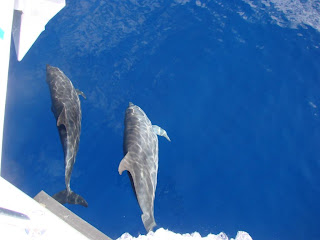 We didn’t catch any fish on the outside, but the dolphins were exciting. Wilma caught an 8-10 lb. Yellow Jack coming back thru the cut. 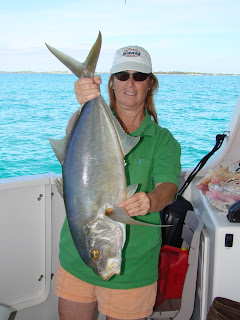 The Royal Marsh Harbour Yacht Club had a rendezvous at Sea Spray during this week which John Henry did not participate, but we were available as dock hands as the fleet returned to Marsh Harbour. 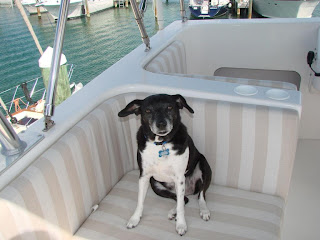 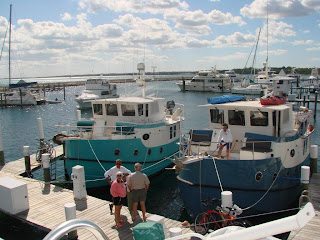 Sara watches Odyssey and Double JJ return as they are right across from us. 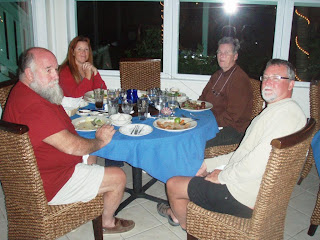 Wink took this great picture of Wilma, Phyl, Andy and Fred eating at Curly Tails restaurant just a few blocks away from the boat. Curly Tails is the name of the local lizard. They are cute, but don't touch....
We have had some mighty interesting discussions around food, groceries and the Bahamas. Here are some interesting facts: In Marsh Harbour there are three major grocery stores. Maxwell’s is my favorite. They have anything and everything you might want to buy grocery wise. The cost in most cases is about one-third more than USA. In some cases, it’s less than the USA. The island has lots of coconuts lying around during this time of year. Wink husked the coconuts, Wilma made a Hawaiian Treat and Fred made Coconut Cream Pies. 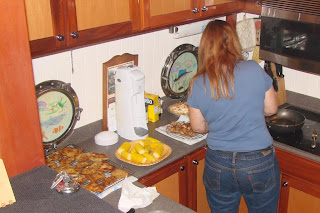 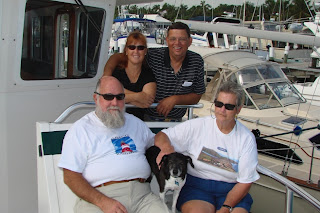 Denise Weston, our friend from Australia came in yesterday and today Fred and Phyl returned to Texas. 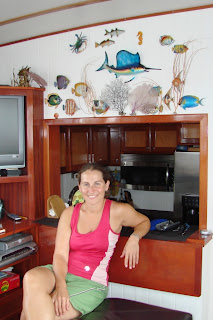 This afternoon, Wink, Wilma and Denise all went fishing for a couple of hours. We caught enough pan fish for a nice meal (probably on Sunday). 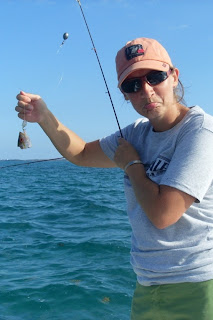 Even the fish were fishing as Denise reeled in one of her catches to find there was only a head left (Barracuda was on the prowl).
Posted by Wink and Wilma at 9:39 PM

I am in a biggest loser competition with 130 people from work for 6 months. I haven't had a fried or sweet thing in a month.... I'm hungry!

I would just love to get my hands on some of those yummy fish you're catching, though!

Live it up! You can always diet tomorrow..... Steph

P.S. I'm on my way out the door to outrigger canoe tearm practice!

Sounds like you are having a blast!
I love the fish decorations over the bar, new since I was there.
What's your recipie for coconut shrimp? I just made some this week from a recipie that was supposed to be like Red Lobsters. It was pretty good, but it took me so long that I probobly won't make it too often.
Jerry's changing jobs again, will be a tool salesman traveling the state. I think he will enjoy it, and will get to visit a lot of hardware store, right up his alley. Then, when I'm not working I'll be able to trtavel some with him. Lil