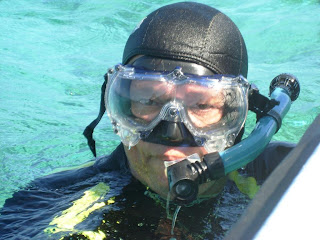 Team 1: Wink the Hunter (The Winner)
We took the skiff out and went snorkeling with our friends Oliver and Sally. The wind was blowing hard, so we found a small island, behind which there was some calm water, and with pole spear in hand, I (Wink) jumped and started hunting for dinner. 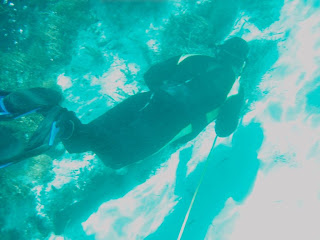 Wink hunting with spear pole.
After about an hour, I came across a couple of small holes in a flat hard bottom area, and there he was, antenna sticking out, no doubt with the attitude of just try, you’ll never get me. The depth of the water was about 12 feet, so I went to the bottom and peered into his hole, he retreated a bit (wise lobster). The only way to get him was to get right on the bottom and shoot at him straight. Not that easy, with a current moving you sideway. I came up for air, developing my plan of attack. I went back down, lined up, shot, and missed. He moved back into his hole a bit, but looked at me with that horned head, saying “I told you so”. In desperation, I reached into his hole (most likely not a good idea, as he might a large green moray ell as a room mate), and he was gone. Damn.

As I was heading up for air, I caught a glance at the other hole, and there was his little brother. OK, he’s not as smart as the other one, with head sticking out of his hole, so on the next dive, I got him from above, a much easier shoot. So much for the wisdom of youth. I took one more look into the other hole, but he was way in, so I gave up.

I continue on looking for other holes, with no luck, but after about 30 minutes, I just had to go back and see if old man lobster was really that smart. I made my way back to his hole, and apparently, he wasn’t that smart, as I could once again see his antenna. This time, I was going to win. I took a deep breath, sank to the bottom, took my time, inched up on him, and “wham”, I think I hit him this time, but when I pulled the spear out of the hole, nothing. With my brain screaming for air, I stuck my arm into the hole once again (dumb) as my old comrade moray might be upset, and take it out on my fingers. I couldn’t feel a thing. I popped to the surface like a cork, gasping and spitting out salt water. I took me a few minutes to get my breath back, and down I went. This time, instead of reaching into the hole up to my elbow, I reached as far as my shoulder would allow, moray ell be dammed. Got Ya’. I held on tight, and pulled him out, NOT! What I pulled out was a huge sea cucumber, hey it was the right size, round, anyone could make the same mistake, especially when your brain is oxygen deprived.

Back up for air, and to rethink my strategy. The next time, I’ll dive upside down, so I can feel the top of his “cave” instead of the bottom, that’s the only place he could hide, provided the hole wasn’t longer then my arm. I figured any self respecting moray ell wouldn’t have a sea cucumber as a room mate and if he was in there, he would have bit my finger off by now, so what the hell. Down one again, upside down, and determined. I stuck my arm in as far as it would go, felt his feelers, he was pinned. Just 2 more inches, and I’d have him. I kicked my flippers as hard as I could, hoping I’d be able to dislodge my arm when it was over, and got his head. He was kicking like Bruce Lee, and was not about to give up. I held on to him, pushed myself back with my left arm, and out he came, kicking and slapping all the way. We both popped to the surface, me screaming for air, and him, slapping his tale and saying to himself, I should have never stuck my head out the second time. 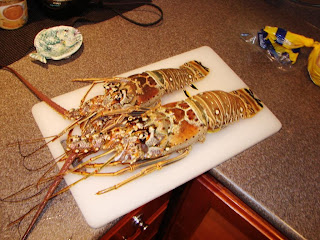 Team 2: Big & Little Brother Lobsters (commonly known as Dinner)
They made great lobster bisque last night, and as for the tails, they’re in the refrigerator, no doubt, Big brother is ready to slap me when I retrieve him for his visit to the bar-b-que.
Posted by Wink and Wilma at 4:54 PM