December 12, 2007
We have completed numerous projects, both scheduled and unscheduled. Wink’s Uncle Jessie came for a week and help with many of the projects the week after Thanksgiving. We have been Anlyzing and trying to repair the port engine which has overheated at maximum speed since the beginning. Bo from First Mate will be here again tomorrow to hopefully finish the repairs. Our watermaker has been repaired. 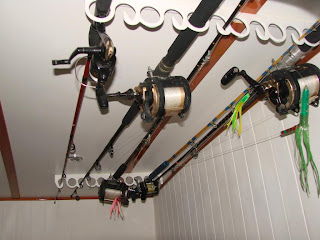 Fishing Rod holder mounted on ceiling in Bunk Stateroom. Two additional cameras mounted, one in cockpit and the other in the engine room. Wink also installed a ABC switch so all the Captain needs to do is dial for viewing.
Wink cut an additional hatch for the port alley in the Bunk Stateroom. The plumbing had to be moved and now we have access to an additional 10’ of storage. Ran a cable and had a local antenna installed for local channels. Wilma painted the engine room. Wink replaced the a/c pump for the saloon. Hung two shelves, one in watch cabin and one in saloon.
Bruce Webster made us great binocular holders and we installed them on both starboard and port sides of pilot house. 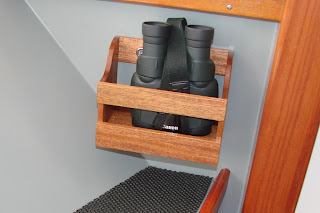 Wilma learned how to make sour dough bread loaves, thanks to Shiela Ingram.

Happenings Around Reynolds Park
On November 18th Andy Allen came in with N37 Sea Dee. He had a friend helping as crew. Joe Pica and his brother were in town for a short visit. Since then, Joe has come back and taken N37 Carolyn Ann and headed for Pensacola. Neil Ingram and his dog Rio was on N37 Silver Queen so we all got together and had a nice dinner on GH47 Fly Bridge John Henry. Steve Smith came in a few days earlier on N37 Avocet. Congrats to Steve and Marilyn who have bought a condo in Gainesville.

November 19 – 23, 2007 - Thanksgiving with The Johnson's.
We picked our friends Chris and Sandra Johnson up at the Orlando Airport. The weather was incredible for the whole week. We cruised up and down the St. John’s River a couple of times and in to Black Creek. We also went into Gainesville and toured Mirage Mfg. Chris and Sandra celebrated their anniversary so we went to Sonny’s BBQ for lunch. We had a great visit and it was wonderful catching up and just enjoying the week. We cooked a ham and had a Thankful Thanksgiving meal. 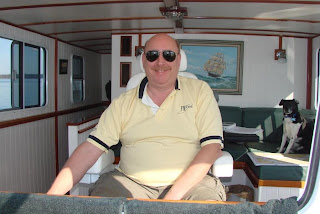 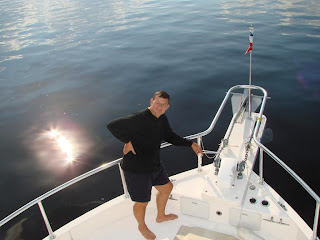 Chris plays Captain while Wink enjoys the view and great weather from the bow.

The first in was Lois and Carl Lantz with GH37 Puffin, showing off a new coat of paint.
Barb and Randy Semper aboard GH37 Lazy Dolphin, believe it or not, came in 30 minutes later. Ollie is their dog.
Brooke and Dee Williams came in a couple of days later on GH47 East Passage. They came in via the Atlantic.
Bettie and Klaas van Esselstyn came in on N37 Moon Beam. We moved Semper Fi Three over next to Snuggery so that all the dog owners could be near each other. Scoshi is their toy poodle.
Art and Ellie Hommes came in with their boat N37 Mer Min. They will only be at the dock for a week. They are having Christmas in Cocoa with their children.
Ted and Terry Woehr are expected on GH37 Berlie Mae during the next week.
Joan Peterson and Bruce Webster were docked at Fernadina Beach for a week and soon they will be docked at the city marina in St. Augustine for a month. Their boat is GH37 Forever 39.
Dave Trauger’s boat Premium Time was launched last week. It’s a GH37 with yellow trim paint. He plans to be a Reynolds Park for a while so he can get his punch list started.
Tom and Debra Jenike owners of Cardiac-a-Rest have been in and out several times. They eventual plan to take the boat back to Hilton Head.
George and Christina Comrie live aboard full time at Reynolds Park Yacht Center on their N47 Christina Seas. They have a new puppy Boosier.
Posted by Wink and Wilma at 11:44 PM No comments: