As we left our story two weeks ago, we had a great Thanksgiving on the fly-bridge of our trawler, John Henry. 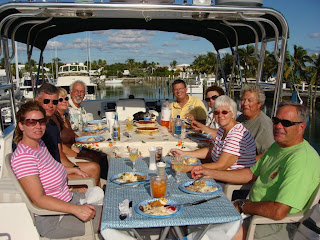 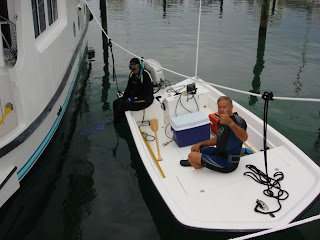 Tim and Becky on M/V Pokey needed their zincs replaced - Wink and Paul volunteered to help.
They donned their wetsuits and masks. Move John Henry's tender over near Pokey and made the dive. 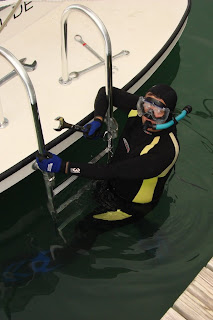 Once the zincs were on, Paul noticed that a propeller was loose so he brought Wink a large tool to tighten it up.
Now Wink has a lot of large tools, but now he's interested in acquiring more - these were neat.
Another boater dropped a valuable boat part overboard and Wink also found it. 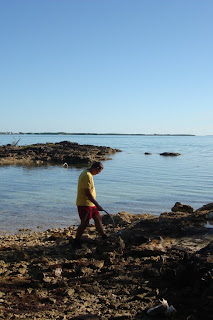 Wilma has been walking 4+ miles a day with the RMHYC (Royal Marsh Harbour Yacht Club) and encouraging Wink to join them. Effective December 1, Wink has joined the Walk & Talk Group. Wink and a few other beginner walkers have came up with a new approach to keeping the walking interesting.
They not only walk and talk, but they are scavengers. They look for interesting items that have been dropped on the streets or washed up on the shore. There seems to be a race on who can find what first.
Wilma's very happy and Wink is walking daily. 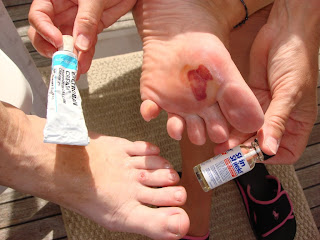 Speaking of walking daily, so many walkers and so many blisters.
The blister owners will remain anonymous and not all blisters are included in the photo.

Luckily we have lots of band-aids, antibiotics and
friends to sympathize with. 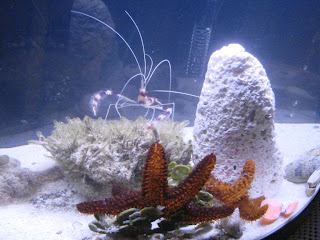 Wink brought back an aquarium from storage in Texas to our boat.
Since we have arrived in Marsh Harbour, we set the salt water aquarium up. Wink and Wilma set out to the waters of Abaco and caught some star fish, and a coral banded shirmp. We named the shrimp - Peppermint. The shrimp molted a couple of days ago. It's so cool.
We plan to release the little guys back after a few days of enjoyment & find other interesting things. 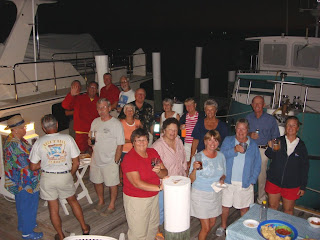 A couple of times a week, we have happy hour to enjoy fellowship and a good time with snacks and beverages.
You can really tell why it's called "Happy Hour" by the picture - Everybody looks happy to me.

I can't name everybody, but Wilma is far right and Wink is the first red coat on left rear waving. 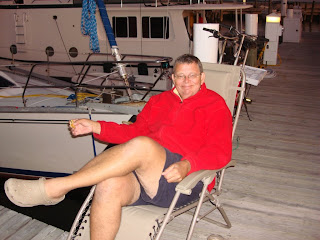 Wink brings his recliner out for happy hour and socializing.

Wink has many man-servants delivering snacks at happy hour. 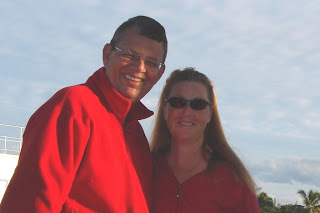 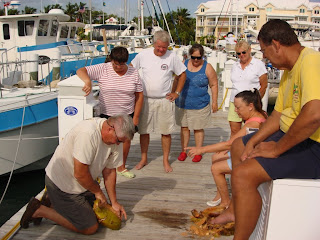 Coconuts grow here year round and they fall here quiet often this time of year.
Wink has the most experience on the dock with opening coconuts since he's been doing it all his life.
John from M/V Our Time is having a lesson on coconut opening from Wink and a crowd gathers.
Everyone is excited to watch and learn.
Lots of coconuts are now being gathered. 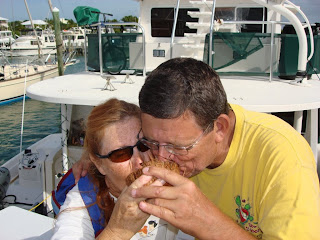 Wink and Wilma share a coconut milk drink from one of the opened coconuts.
A bad day in the Bahamas is better than a cold winter day somewhere else.
Speaking of weather, we will be having winds 20-25 mph for the next 4-5 days.
It's sweatshirt weather in the evenings, but warm during the day. 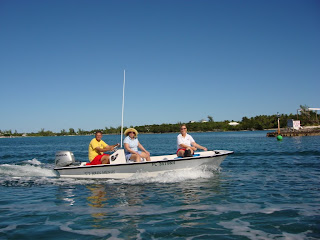 Last weekend, several of us Dinghyed over to Hope Town for lunch.
We took three boats. Our boat had Wink, Sherry and Wilma.
Our boat is the biggest boat and we had the most horse power so it wasn't much of a surprise that we were the fastest. 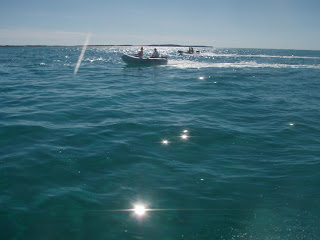 The sun was gleaming and the water was calm and nice. The boat drivers focused on just who was going to arrive first. Even though our boat was fasters, we waited for boat #3 because they knew where we were going.
Boat 2: Fred Reed & Judy Law of Amarse.
Boat 3: Dave & Barbara Bluto from Chablis
and Rita Wieczorek from Magnum Opus 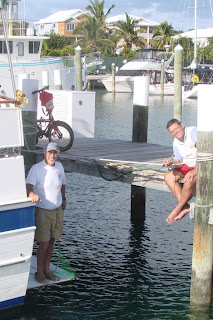 Fred (right) and Wink (left) decided to fish from the dock and catch enough for dinner.
Fishing turned into another dock participation project.
Everyone standing around watching and amazed at how many fish were being chummed to the area. 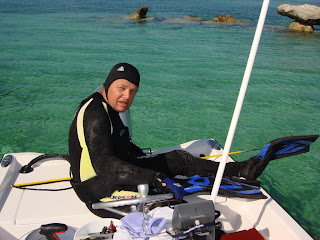 Wink and Fred Reed went out fishing. Fred came along to manage the boat because Wink wanted to spear fish and we believe in the buddy system. No one goes in the water without a buddy watching.
Once they arrived at the diving area, Wink discoved that he forgot to bring his mask. Since he gave Wilma such greif for forgetting her fins last week, he really didn't want to come back to the boat and say he had forgotten his mask & snorkel.
He came back to the boat and said that he'd like to try out the other mask. Wilma confirmed that he wanted his spare back up mask & snorkel. No, No, he said he wanted the regular mask that he normally uses. Oh, Wilma finally got the idea that he had forgotten his mask, but just didn't want to say it out loud in front of Fred. Wilma was a good doobie and quietly retrieved the forgotten mask. Away they went.
Once they arrived at the dive site again, there was no mask & snorkel. It had fallen over board somewhere before arriving at the dive site. They guys arrived back at the boat, now requesting the spare back up mask & snorkel. These mask are vision correcting and are quiet expensive somewhere around $250 a set. Wink also rigged up the tender with a rope for drag snorkeling. Fred drove and Wink drag snorkeled along looking for the mask & snorkel. The sea of Abaco is only about 10 feet deep and it's also very clear, but the chances of finding a small mask seemed overwhelming to me. 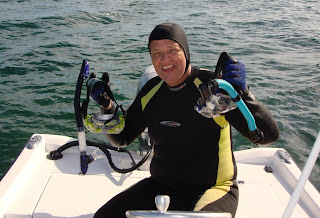 But the guys had been using a gps track and low and behold, suddenly Wink let go of the drag line and dived down - when he came up he had his other mask & snorkel.
The guys were so happy that they continued on to the dive site. 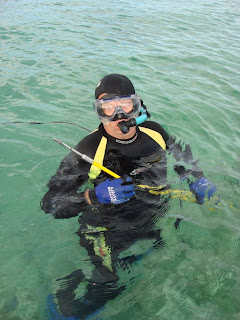 Wink - prepared for snokeling and fish spearing.
In the Bahamas, you can only catch lobster with a Hawaiian Sling or Pole Spear.
You must be free diving or snorkeling - no tanks.


Wink is ready for the challenge and Fred is managing the boat and being look out. 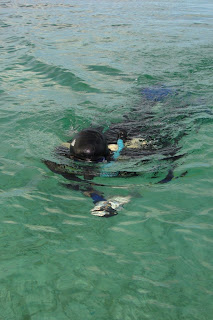 Wink was able to catch three lobsters as well. 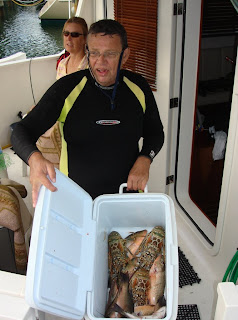 Wink and Fred had a rough start and thought they would never get to the diving and fishing, but their luck changed.
We had 6 snappers, 3 lobsters and 2 very happy men.
Left: Wink showing off his catch to the neighbors with Wilma in the back ground. Wilma stayed home on the boat to wax all the floors and barely finished before they returned. 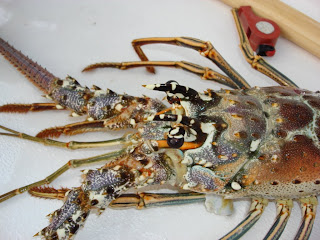 A CLOSE UP OF ONE OF THE LOBSTERS.
Wilma thinks that this is a great picture and had to include it. 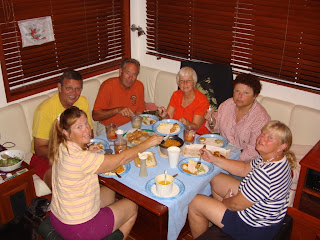 Wilma, Wink, Paul, Sue, Sherry, Judy and Fred is taking the picture from the stair well. 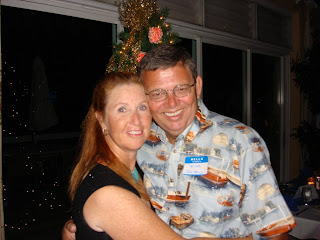 NOW A CHRISTMAS STORY!
On December 9, 2008
RMHYC Christmas Party
Wilma and Wink posing in front of the Christmas Tree. 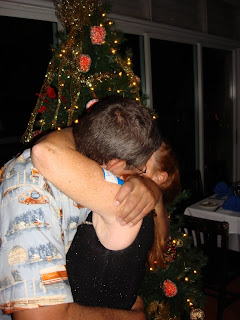 Okay, I had to throw this one in.
Wink kissing Wilma in front of the Christmas Tree! 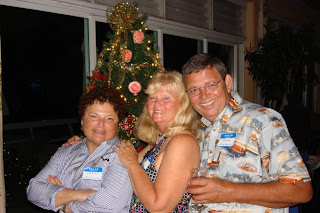 Sherry, Judy and Wink
You got it, In front of the Christmas Tree! 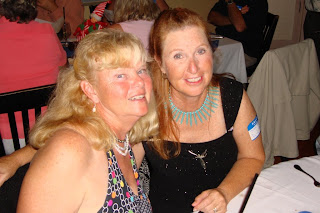 Judy Law and Wilma at dinner. 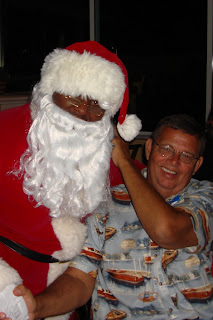 Wink was talking to our Bahamas Santa Clause.
Santa asked me if he'd been naughty or nice.
After that kiss a couple of photo's up, I had to say.
N I C E, REAL N I C E!


So here's what Santa gave Wink. 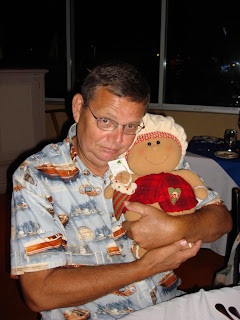 Those eyes look like Antonio Banderas playing Puss N Boots in the Shrek movie.
It's a gift and a curse.

I'll try to update every weekend. Last weekend, we didn't have internet, but it looks like that has been repaired.

Posted by Wink and Wilma at 7:44 PM No comments: