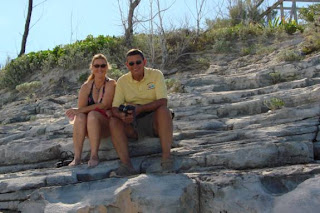 Wilma and Wink Thornton in the Abaco's, Bahamas - December 2008

It was a great day in the Abaco's. Wink and Wilma went out in their skiff, but first they had to stop and fill the tank. Luckily it has great fuel economy. Wilma hold the boat close to a piling while Wink pumps the fuel. 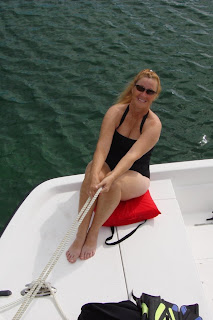 At the end of the day, we have happy hour (not every day but often). The boaters from Docks 3 & 4 gather at the end of Dock 4 for good conversation and some snacks. Fred Reed from Amarse usually climbs on tops of M/V John Henry for a group snapshot. 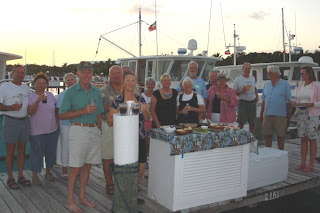 On Christmas Day, we held a Noon - happy hour to get meet, greet, and wish everyone well. 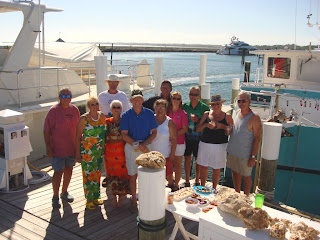 The big group broke into many small groups for the evening meal. M/V John Henry hosted the Christmas meal for Sue & Paul Graham, Fred Reed & Judy Law, and Sherry & Fred Sztul. Wink is in the navy blue and Wilma is taking the photo from the stairs. 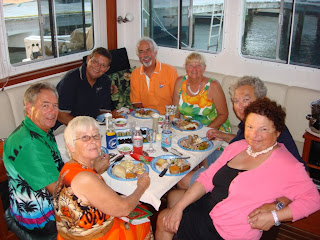 Wink and Wilma did have some small decorations on the outside of the boat and a small tree on the inside with lights surrounding it. The presents stack was bigger than expected. 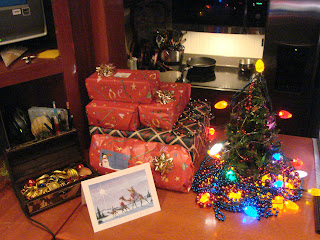 Judy brought over a rum cake for dessert and it was beautiful and delicious. 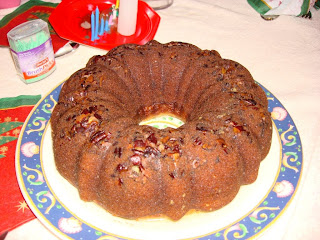 All the boaters were generous to each other sharing small treasures and edible delights. 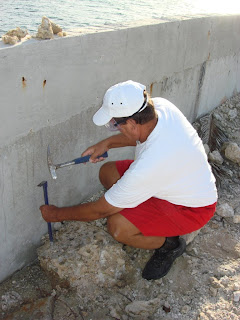 Wink and Wilma started enjoying geology this past summer. we brought that interest of exploring rocks with us to the Bahamas. Wink has found many interesting rocks with crystals and calcite in them. 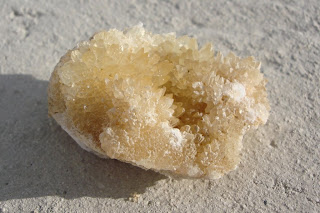 A beautiful example of calcite in a local rock - found near the water. 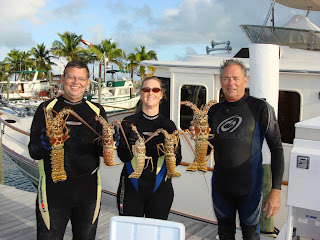 Speaking of water, we went out with Paul Graham looking for a little dinner and that's what we found - they call them "Bugs" over here, but Wilma prefers their nickname "Lobsters". 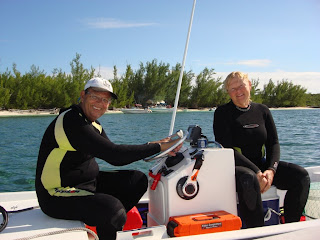 Wink sitting with Judy Law on our skiff as we enjoy the Tahiti Beach area. Wink and Fred hung out and Wilma and Judy snorkeled together. While Wink and Fred were hanging out, one of Fred's flippers flipped off the boat and was lost. We spent quiet awhile snorkeling around looking for it. At one point, we performed a tripod snorkel tow. Wink held on to a line tied to the back of the skiff. Wilma and Judy held onto each of his feet. It was fun. 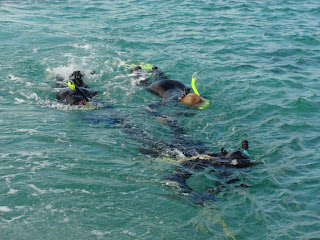 We did not find the fin. Fred had to buy a new pair of fins. But we did find a nice queen helmet. There were several helmets in the area. We also found a tulip shell and some sand dollars. 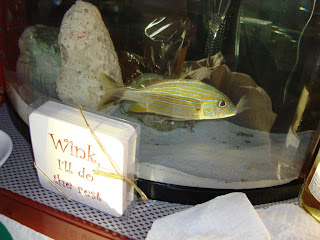 Just for fun, we brought an aquarium with us to put small creatures in for a few days at a time. After a few days we release the creatures and hut for different ones to enjoy. Fred Reed and Wink collaborated on an electrical problem for M/V Amarse. Once they were at a good point, Fred continued working on the problem since it was his boat. Fred also found these disposal coasters that summed up the events. "Wink, I'll do the rest" is just what Fred was thinking. 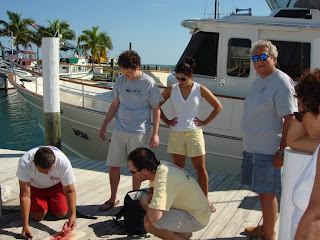 Fred and Sherry Sztul's family came for a visit during the holidays. While they were out cruising around in their sailboat, Josh caught a mackerel. The family brought it over to Wink so that he could teach Josh and his brother Henry how to fillet it. Rachel (Henry's wife), Fred and Sherry watch Wink as the boys received their fish cleaning lesson. 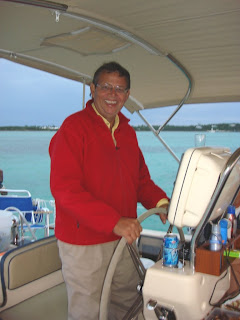 After the lesson, many of the Dock 4 neighbors of Sherry and Fred were invited for a New Years Eve cruise on their sailboat. Fred even let Wink get a picture pretending to steer.

Josh and Henry were trolling a line when their father suggested that they stop and help him with the sails. Wilma gladly donned the fishing pole while they were busy. 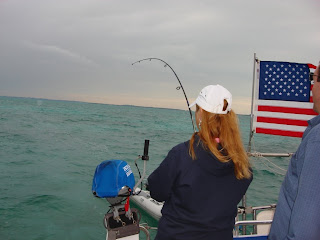 It didn't take too long before Wilma had a fish on the line. It was a good fight and the fishing rod was a little quirky with very light line. 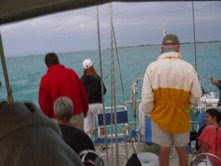 Wink couldn't believe it. He had to go and see for himself (red coat). Wilma caught the fish just off of the Hope Town light house. 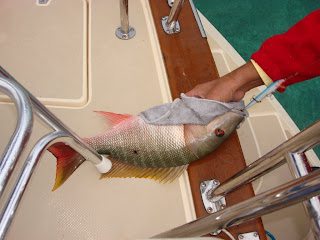 Wink was a great help in getting the fish lure out of the fishes mouth. The fish was about 4 lbs, commonly known as a mutton snapper or candy snapper. Wink cleaned it and we gave it to our host for their dinner.
We returned to the docks about 7:30 pm and everyone went to their own New Years Eve plans.
Most of us just went inside and went to bed, but Wink and Wilma stayed up for the New Year.
HAPPY NEW YEAR 2009 TO ALL OUR FRIENDS AND FAMILY!!!!
Posted by Wink and Wilma at 8:58 PM 2 comments: