Sara the sea dog really enjoyed the grass a Wilma's son's home. She had squirrels in the back yard throwing pecans at her which made her more diligent to keep them moving. She stood guard on the porch a lot also just napping and keeping one eye on the trees.
Wink, Wilma, Amber and Emma had made plans to travel on a 3 week road trip north from Texas. Sara the sea dog was left with Wilma's son during this time.
On Thursday, July 1st, the group loaded into the car and left at 7:15 am. As we headed for Wichita, Kansas - enjoying some music from one of Amber's Cd's, we happened upon a song about seizing the day. We started talking and decided that since Amber was in charge of helping manage our summer budget and Emma was in charge of helping with the maps and directions of traveling, we should all have a job and consider it a summer business. It was Winks opinion that if we acted like it was a business and we had goals then we would probably get more out of it. After discussion - we decided our name would be: Buddies Exploring America (BEA). Wink would be the CEO (Chief Executive Officer), Amber would be the CFO (Chief Financial Officer), Emma would be the CLO (Chief Logistical Officer) and Wilma would be the DO-SO (Director of Order-Security Operations) You got it! Anything else that would need to be done on this trip, Wilma would DO-SO.
We stayed our first night at Hilton Garden Inn in Wichita, KS. Although we had the reservation, we were totally surprised that our arrival was so important that they had arranged a concert by the lake for us that evening. 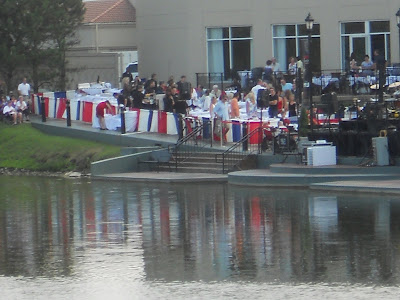 They included fireworks as a great ending to our first day as a company and a great trip beginning - giving us exclusive seats for enjoying the evening. 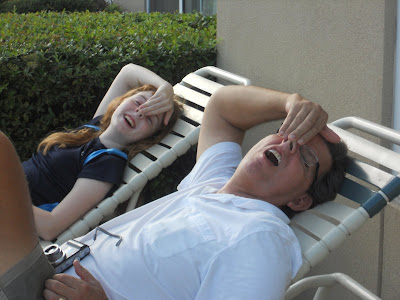 Amber and her Grandpa giving Grandma a photo to remember while Emma socials with all the other kids playing chase. The Hilton also had a great pool and exercise room which the girls took advantage of during the evening. The next morning we headed west toward Kansas City, MO.

In route, we made an unscheduled stop at the Old Depot Museum in east Kansas. Before we could go in the Old Depot Museum, Amber had to check it out and determine if the price of admission was within our budget. At only $8 for the 4 of us - we were approved for the expense. 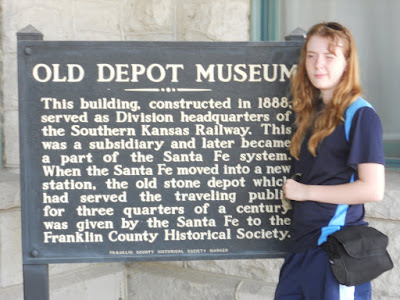 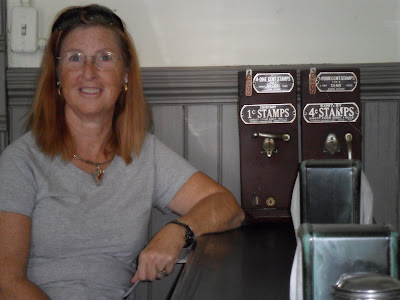 Local businesses of past era's donate some of their assets to the museum as they either modernize or go out of business. Wilma sits next to old stamp machines in an old diner setting from the local drug store. 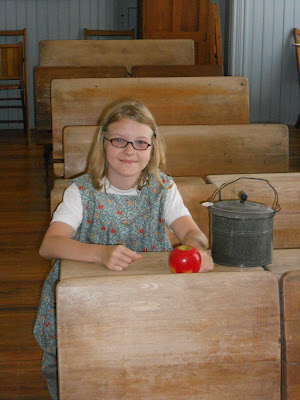 Emma was dressed in a "ole timey" school smock (school uniform), supplied with an apple for the teacher, and a lunch pale for this photo in the "one room schoolhouse" setting.
After our visit we continued east where Amber declined an opportunity to visit another museum because it cost $35 for all of us to go into and it was 20 minutes until closing. Smart Girl! We continued on to our friends "Pat & Pat" home in Kansas City, MO. They are boater friends that have a Pilgrim 43 - M/V Salty Dawg. They live on Lake Lottawana and he's a Rear Commodore for his yacht club.
Posted by Wink and Wilma at 8:47 AM 1 comment: