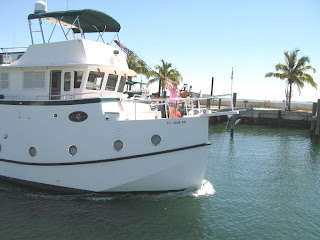 We crossed through the Whale Cay cut without any problems. We traveled with our good friends Pat & Pat Dwyer on Salty Dawg.

After our brief stay anchored at Manjack Cay and no additional Internet available - our spare time was spent enjoying our hobbies. Wilma worked on jewelry making and painting. Wink enjoyed his computer game. 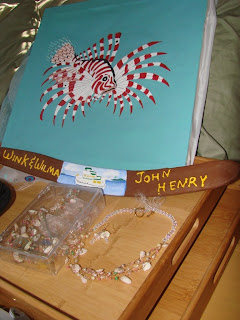 Lionfish painted with acrylics - still working on this project. Wilma painted a Junkanoo bean with a picture of our boat John Henry. Wilma also learned how to crochet necklaces at Boat Harbour. The best part is that Wink and Wilma collected the shells themselves for these necklaces and matching earrings. 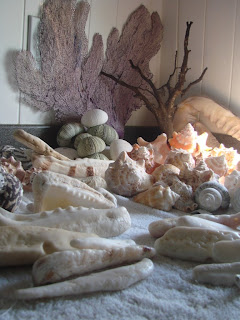 We've enjoyed walking the beaches and collecting lots of shells, fans, driftwood and sea glass. Of course, all these had to be cleaned - another part-time job. Wink also took lots of underwater photos. 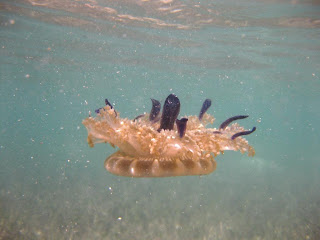 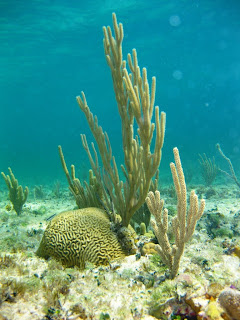 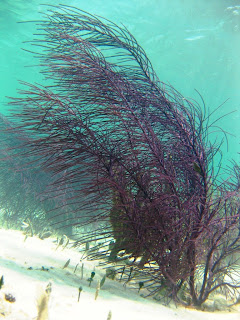 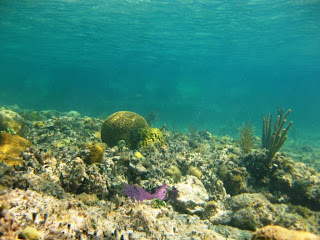 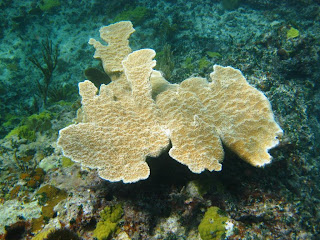 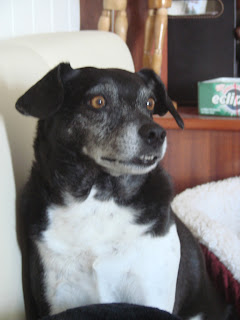 Sara Sota the sea dog adapted well to living on board John Henry full time. She has a favorite area for doing her business and she always is a lady about it. 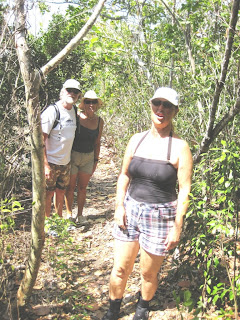 On Allan-Pensacola Cay, Pat, Pat, Wilma and Wink explore the beaches and the abandon ruins of a old radar station. On this cay we found a great hanging tree of ornaments left by other travelers and explorers.
Mr. Pat found a couple of buoys on the beach and had a great idea of putting our names on them and then placing them on the hanging tree.
He painted them and on our last morning in Allans-Pensicola Cay, we had a hanging party. 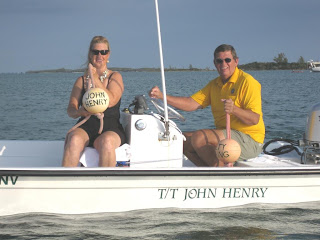 Wilma and Wink on our 2008 Mirage Skiff with our John Henry Buoy for the Allans-Pensicola Cay Hanging Tree. 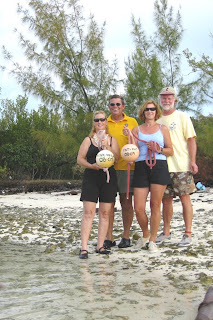 A group photo of the explorers and their buoys. Wilma, Wink and the Pats. 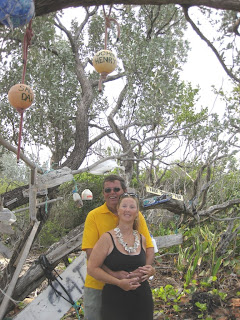 Wink and Wilma pose under the John Henry & Salty Dawg buoys.
Mr. Pat climbed the tree, did all the work and should receive all the credit for the fun. We all had lots of fun. 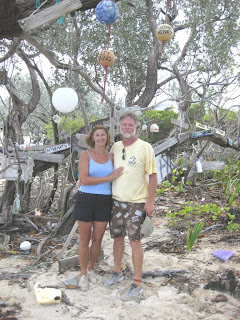 Pat and Pat's turn under the buoys. Enjoying the day before head north to Double Breasted Cay. 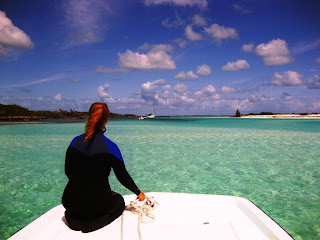 Double Breasted Cay has a large sandbar area where we found a conch.
The water here is emerald green with the sky a royal blue while fluffy white clouds dance across. Wilma would like to paint like this. 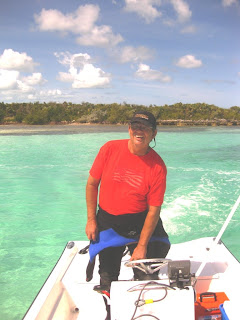 Wilma on the bow of the skiff and Wink driving - we spent the day diving, and exploring. 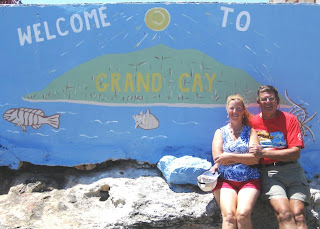 With Grand Cay only a couple of miles away, we skiffed over and had a look around. 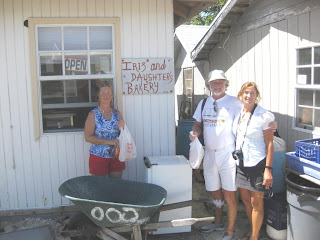 We bought fresh bread at one of the local bakeries. We walked the entire town, bought souvenirs and had lunch in a one table cafe in less than two hours. This is an extremely friendly small town.
The winds changed so we moved from Double Breasted Cay on the south side of Grand Cay to the north side of Grand Cay. We tried to explore Walkers Cay but due to hurricane damage, the cay was off limits.
The weather on the ocean side was calm so we went diving and beach combing. 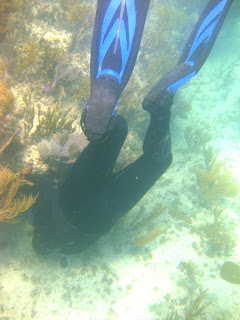 Wilma photographed from the surface while Wink dived the 15-20 feet hunting fish. 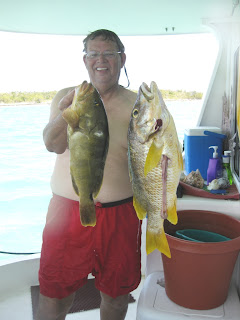 He caught a grouper and a mutton snapper. We enjoyed a wonderful dinner that evening.
We are thankful that Wink is a strong and steady swimmer.
As Wink was swimming back to the skiff to put the first fish in the boat, the skiff was missing. With fish in hand, he swam faster as the skiff was drifting quickly into the ocean. Wilma couldn't keep up and had to stop and wait. Another few minutes and we would not have been able to retrieve the skiff by swimming. (Luckily the Pat's were with us and could have taken us out by boat to retrieve the skiff). At first, we thought the anchor had dragged, but as it turns out, the anchor line loosen and slipped away from the boat. The anchor was still firmly on the bottom.
This was truly one of the scariest moments in our lives while living on the boat. Now we double check the anchor line - maybe even triple check.
WE were looking for a weather window to return to the USA. The winds were about 20-25 mph for days. We checked the weather on WeatherWorks for a Gulf Stream crossing. There was a possible weather window on Thursday, April 22nd. On Wednesday, the weather window seemed to have closed. So Thursday about 8:00 a.m. we were preparing to go ashore with Sara when we checked in with Salty Dawg. They had just received an update and the day was perfect to cross. We agreed and within 30 minutes both boats had aweighed anchor and we started making our way across the sea of Abaco from Grand Cay towards the Gulf Stream
About noon, we received a call from Salty Dawg, they were having a problem and needed to stop for a short time. Wilma decided that water was too beautiful to pass up the opportunity of fishing. Within 15 minutes, Wilma had caught 5 small fish for dinner. Salty Dawg called and said they had made their repair so away we went.
We left the Sea of Abaco about 4:00 pm and traveled through the evening crossing the Gulf Stream with no incidents. The water was beautiful, the sunset wonderful and all was good.
With Wilma on the bow of the boat using her night vision, and Wink in the pilot house utilizing electronic charts, we made our way into the Ft. Pierce Inlet about 12:30 pm and anchored south of the ICW bridge in front of the condo's on the west side. 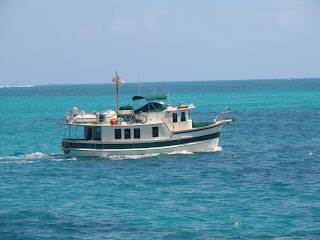 Salty Dawg on the bank in the sea of Abaco. 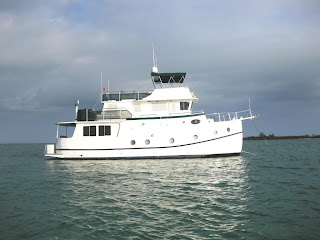 John Henry in the sea of Abaco. 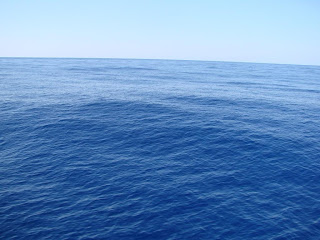 The Gulf Stream as we crossed back to Ft. Pierce, FL.
When we awoke on Friday morning late - the Pat's moved to the city marina for repairs while we stayed in the anchorage. When we anchored at 1:00 a.m. there were many boats in the anchorage. There were so many boats and so little light, that Wink and Wilma went into the shallow water to set the hook as we were exhausted. It was dead low tide and we had less than a foot under the boat, but that was enough. However, after we set the hook, the wind changed a little and we ended up on the bottom. It wasn't a firm hard aground, only a soft hard aground. With a rising tide, we were floating free within a few minutes. So early in the morning during high tide, we moved our location to a deeper spot as many of the boats had left.
Later in the day, it was old home days in Marsh Harbour. Puffin, LoQueSeA and Tally Ho trawler made their way to the anchorage. They had arrived the day before also entering at Lake Worth.
On Saturday, we went to the city marina to visit the Pat's and also visited with Indemity and Terralee who were in the same marina. We also spoke with Tim of Pokey. He said Pokey was at a Harbortown Marina while they were at home. We also learned that Jim on Christine was in Harbortown also. He had sold his boat and was spending time with the new owners getting ready for them to take possession.
On Sunday, Our Time and Silver Foxes came by and hailed us on the VHF to say hi as they continued up the ICW toward Cocoa Village. We left Ft. Pierce on Monday morning and anchored north of the bridge at Cocoa Village.
Posted by Wink and Wilma at 2:49 PM No comments: