Shortly after arriving in Marsh Harbour, Wink and Paul went out lobster hunting. They were lucky enough to get a few for dinner. Although there were a lot less lobsters this winter. A few days later, Vanessa asked Wink to help her learn how to hunt & more importantly to catch lobsters. 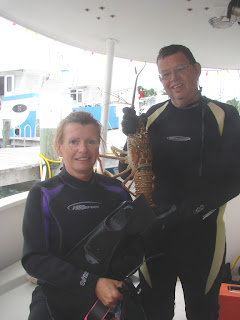 Wink was able to demonstrate the hunt and catch for one lobster. That's the only one that was in available for shooting. Others were too small. But since they were out, why not get a couple of fish for dinner. Wink was able to catch a large Black Grouper which was delicious.

Shade-Mor took a group over to Guana Cay to enjoy a day at Nippers either having lunch or walking their huge beach or both. The beach had almost no shells on that visit. 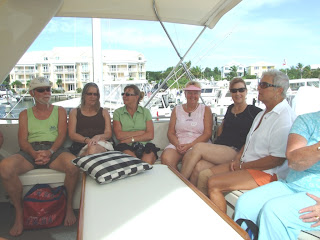 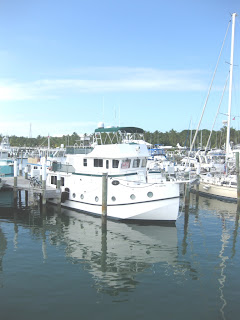 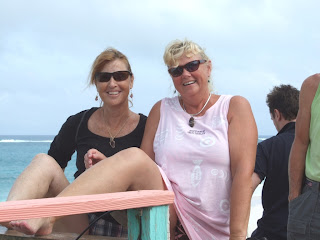 The top picture is of a group of boaters on the fly bridge of Shade-Mor as we leave the marina for Nippers & more Fun. The middle picture is of John Henry in it's regular slip #413. The 3rd picture just above this description is Wilma and Judy washing off the sand from their feet before enjoying a nice lunch and a little dancing. 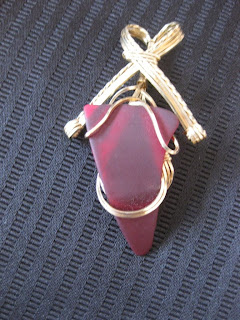 14 kt Gold Filled wrapped Red Sea Glass
Wink and Wilma will be participating in the Man-O-Way Cay flea market in February. We both took wire wrapping jewelry classes in the summer in Jacksonville, FL. Wink is creating wire wrapped works of art while Wilma is crocheting necklaces and creating earrings. 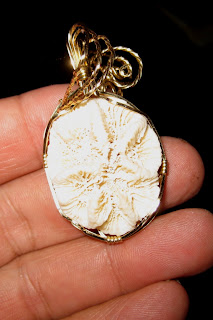 14 kt Gold Filled wrapped Ancient Sea Coral
Wink traded one of the green recliners for a bigger, softer recliner from the condo. Everyone know that Wink ONLY sits in that chair, but Sherry was caught relaxing and given a warning. 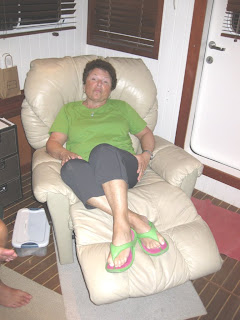 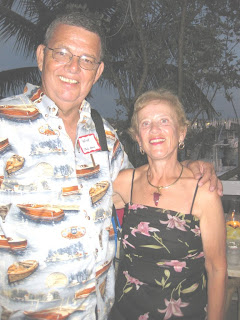 Wink with Rita who is enjoying her new piece of jewelry that Wink made. 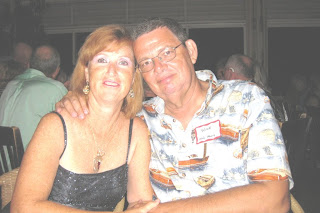 Wilma and Wink at Christmas Party for RMHYC at Abaco Beach Resort. Wilma enjoys her own Wink made jewelry. On Christmas Eve, Wink and Wilma held and Open House on John Henry welcoming all RMHYC members to attend and enjoy Holiday Snacks and enjoy a social atmosphere. Wilma made 20 dozen of cookies and 4 gallons of punch. 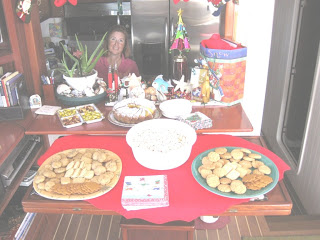 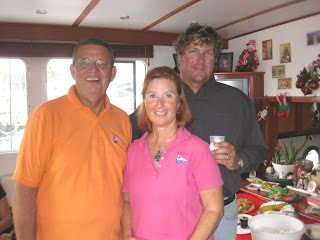 There were people in the Pilot House (upstairs). 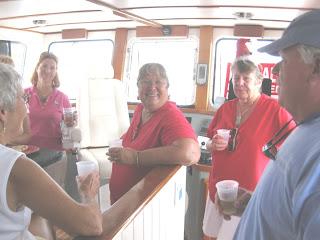 There were People on the Fly Bridge (top of the boat). 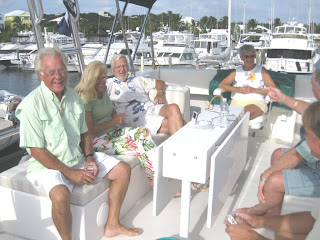 We even had a giant ELF drop in. Brian on Roving Seas wore his festive elf outfit. 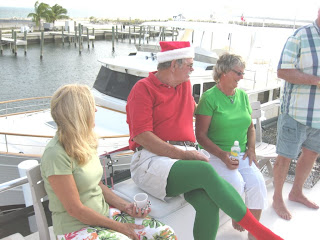 Carl and Mike waved a Merry Christmas to All. 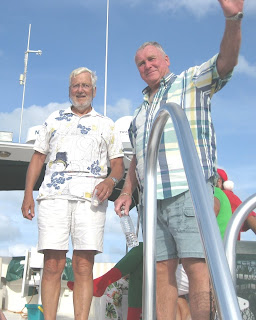 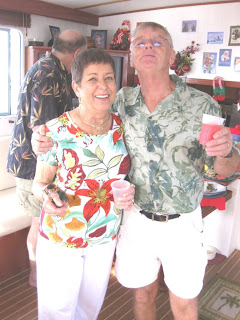 Ron and Mike enjoying the treats. That Mike really gets around. 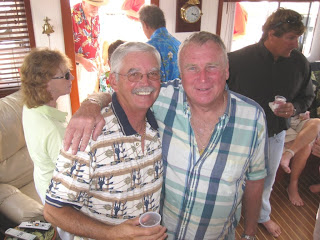 The food was fabulous at the Christmas Open house. The party was hearty and the crowd didn't want to go home. Our 1-4 pm party went until 7:30 pm. Now that's a party.....
It was just a week until New Year Eve. Our dock, Dock 4, had organized a New Years Eve party. The boaters have new picnic tables courtesy of Abaco Beach Resort. Our party was scheduled to be held at those tables but just as we started setting out the food, it starting raining. The party was moved to John Henry within minutes. 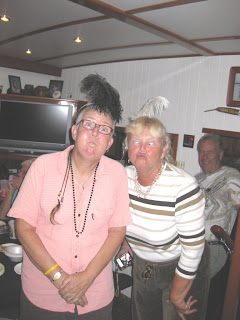 Lesley and Judy were wearing feathered hats and somehow the discussion centered on how they looked like a couple of birds. So they did their bird impressions. 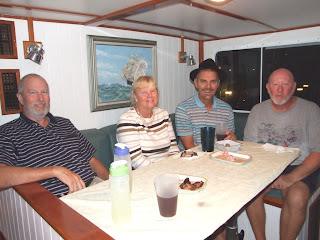 Since we had 20 people planned for dinner, some of us had to eat in the Pilot House. (upstairs) The dinner was planned as a progressive dinner so each course was brought in separately. Below Wilma brings in the ham that Sue and Paul cooked. 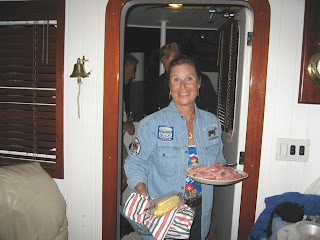 Wilma always gets comments about the Flintstones. It was pretty funny when both Fred and Fred wanted a picture with Wilma. For the record, there are at least 4 Fred's in Boat Harbour with only 1 Wilma. 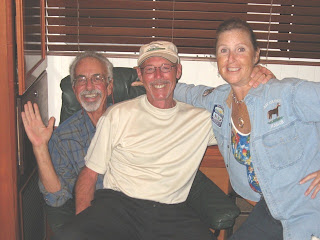 After Dinner we cleared the floor and made room for 3 couples to dance. Before the dancing was over, Wink and Sara took a musical Stroll. 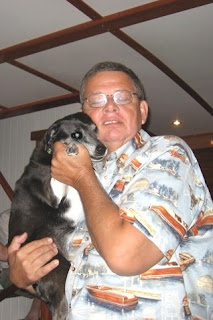 Mary brought some horns for blowing at midnight. We decided to have a practice session so we'd be ready at Midnight. The tunes were so melodious that Sara joined in with a howl. 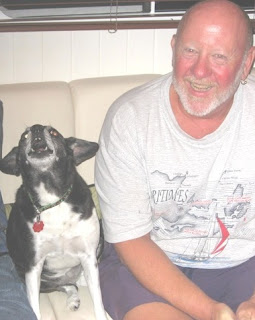 For Dessert, Wilma bought out a Chocolate Cake and Hiupia (Hawaiian Coconut Candy) while George and Jane brought down some Cheesecake. January 1st is Jane's birthday so we sang Happy Birthday and presented her with a crown. 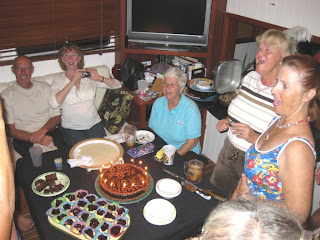 Within about 15 midnight, the group moved up to the Fly Bridge. The rain had stopped and we had a beautiful Blue Moon (2nd full moon of the month). Blue Moons are rare, about every 24 months. We were able to view 4 different firework displays which were Hopetown, Sea Spray, Regattas and someplace in front of the resort. We were the loudest group in the Harbour on New Years Eve.
Wink, Wilma and Sara the sea dog wish you all the happiness, health and good tidings for a spectacular new year in 2010.
Posted by Wink and Wilma at 9:16 AM No comments: