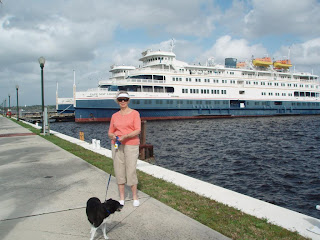 This is our friend Nancy Burns. She is visiting us from Charlotte, NC this week. Unfortunately this is the only sunny hour during the visit. Nancy and Wink use to work together at Arkwright Mutual Insurance before the big merger to FM Global in 1999. Nancy retired, but Wink remained with the company until July 2006. Nancy is holding our dog "Sarasota" while Wilma takes the picture. Behind Nancy are two cruise ships that have been docked at Reynolds Park Yacht Center for quiet awhile and it's my understanding that they are FOR SALE. I think their names are the Cape Cod Light and the Cape May Light.
Nancy asked some very good questions about the "John Henry". This is a good time to reminder to all those wonderful fans out there that in the very early blog postings - we have lots of details about John Henry's length and beam and also lots of inside pictures. This is a picture of Wilma standing next to "John Henry" while docked at Green Cove Springs, FL. 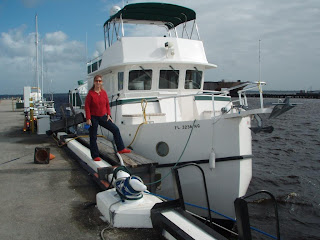 Nancy took a great picture of Wilma and Wink in the galley. We were tag teaming on Monday Night (10/29/07) making dinner. Wink's mother's recipe of String Beans and Pork. We also invited Neil Ingram over for dinner as he just returned to Silver Queen. 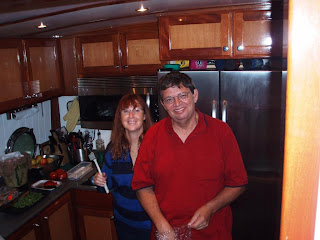 Here's the recipe for a simple dinner.

Heat sesame oil until hot, add onion and pork and brown.
Add garlic, ginger and chili paste (or use fresh to you liking)
Add broth and string beans. Add enough water if necessary to make sure beans are covered. Cover with lid and bring to a boil. Then reduce heat to medium temperature and cook for about 1 hour until beans are tender. Add soy to taste and serve over rice. 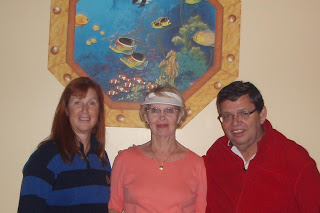 On Tuesday night Nancy treated us to a seafood dinner at The Top of the Reef resturant in Green Cove Spring. It was great, Thanks Nancy...

Posted by Wink and Wilma at 9:38 PM No comments:

Wink and Wilma will be staying on John Henry (more or less) until the summer of 2008.
Our future plans include Thanksgiving on the boat with friends. Taking the boat around to Sarasota, FL for Christmas with the family. Then hopefully over to the Bahamas and a good bit of time in the keys and West Florida Coast. Keep checking in and staying in touch. Wilma is going to try harder to update on a weekly basis (TRY) anyway. Love to all...... 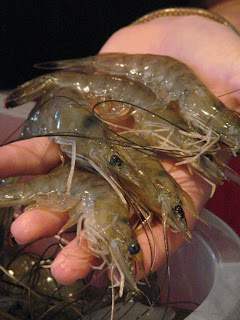 Wink and Wilma went Shrimping in the St. John's River.

Our first day we caught 35 lbs. Altogether we caught and kept 48 lbs of shrimp. We caught even more shrimp and gave it away. Our freezer only holds so much! 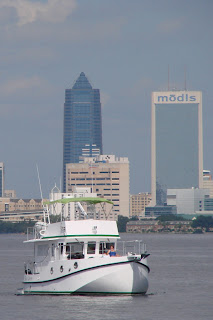 Neil and Sheila Ingram, new owners of "Silver Queen" are docked just across from "John Henry".


Today, "Silver Queen" a N37 and "John Henry" a GH47 went for a little cruise north towards Jacksonville, FL for a nice day on the water.

This photo is of "Silver Queen" with a Jacksonville backdrop.

Paul and Sue Graham, owners of GH37 "Odyssey" are here at Green Cove Springs, FL getting ready to make their annual crossing to the Bahamas. I don't have a picture of "Odyssey" at this time. 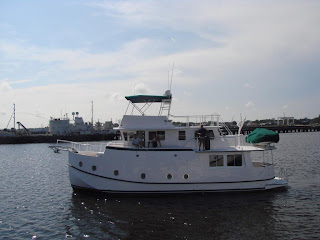 Jan Westermann and Dennis Taylor took "Mother Ocean" out and about for a test drive recently. "Mother Ocean" is a twin (not identical) to John Henry. She's a GH47, white hull with green trim.


Since this photo was taken, the deck netting has been added and the boat is almost ready to head north next week. 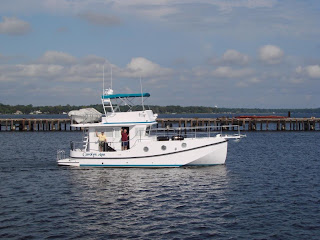 
Joe was in town a few weekends ago with a friend getting the sea trials accomplished for "Carolyn Ann".


Wink and Wilma were in Sarasota getting our condo ready for sale. Uncle Jesse was a big help and we really appreciated all that he did and does for us. 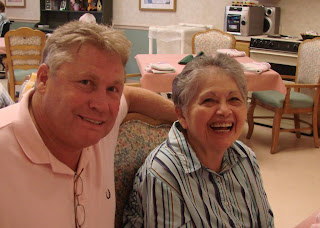