By the time our tour of the National Park Circuit was complete. The girls had more badges than I can count, or recount in my head at this time. As we visited the last National Park, Washita National Park - the Ranger was so excited to see the girls displaying their badges and excited about getting another badge that she had their picture taken with her and she submitted it to the Park Service Newletter. Of course, Parents and Grandparents got a copy of the publication. 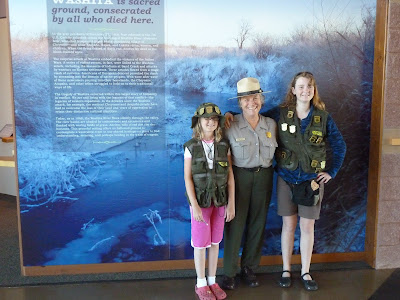 For the Rest of the Summer, we enjoyed the grandchildren back in Texas visiting our son (their father).
Wink escorted the girls back to their mother in New Hampshire in mid August. We said goodbye to our son in Texas and headed back to the boat.
We had lots of stuff to do as we wanted to head for the Bahamas again in late October 2010....
We had gotten new batteries in November 2009 as we headed for the Bahamas, but we decided to get new battery boxes and the automatic watering system this year. The old batteries had to be removed so Wilma decided once again it was time for a new paint job to the engine room. Boy, does it look nice. 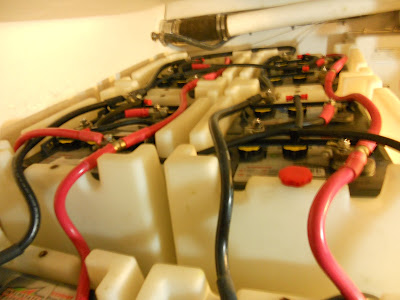 New Battery Boxes - with automatic watering system.
Wilma and Wink decided to put John Henry up for sale officially. We have listed with Mirage Manufacturing - Ken Fickett, Owner. (Note the for sale sign on picture below). Since the boat is up for sale, Wink and Wilma have decided to replace all the caulking on the Flybridge and clean everything super thoroughly. We also had John Henry pulled from the water and had the bottom, cleaned and painted.
In October, the long range weather seemed to be good for an early crossing to the Bahamas. Wink and Wilma started the provisioning for the 3-4 month stay. We shopped for the freezer and filled it. We shopped for canned goods and filled the pantry.
It's mid October and we're a week away from departure. Wilma gets a call from her youngest brother - he's in the hospital (maybe a stroke) but he's alert, talking, no real side effects. Wilma has 4 brothers and 2 sisters. We continue our plans to the Bahamas. Three days to departure, Wilma gets another call from her brother. NOT A STROKE - BRAIN MASS FOUND. We had better go check on him before we leave. We were leaving early anyway - what's two weeks delay.
We arrived in Texas at the hospital. By this time, the doctors had determined that it was a Brain Tumor - Possibly Cancer - Wink Says: I think we better stay here for a while. Wilma Agrees. 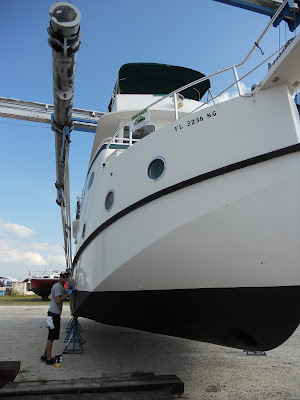 Nice post. I learn something totally new and challenging on blogs I stumbleupon on
a daily basis. It's always useful to read through articles from other writers and practice something from other sites.